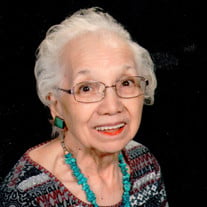 Winema Laura Amauty, 81, of Anadarko, OK was born April 20, 1938 wife of Ramon, mother of Anthony, Amanda, grandmother of Dana and Shane, passed from this world October 24, 2019 in Anadarko, OK. She went to be with her father George Lipscomb McGilbry, mother Lucy May Kite, older sister Galela and twin sister Winona of whom are in Heaven. She fought a year long battle with lung cancer and Parkinson disease. She survived two other bouts with breast cancer in the last 30 years. Winema was educated in the hometown of Chocotah till her 4th grade year. During WWII her father George got a job in Richland, Washington at Hanford Atomic Reservation. She exceled at tennis and writing. After graduating from Richland College, she took a year from school to work at LockHeed where she worked in the blueprint section delivering blueprints on roller skates and bikes. With the money she saved from working she went to Bacone College like her older sister and mother. At Bacone College she met Ramon and married in 1959 at the original Ware's Chapel. While Ramon getting his degree at SWOK, she worked in the library at Riverside Indian School. Anthony was born in 1960�. Amanda was born 17 years later in 1976. During the '60, '70, and �80's, she worked in education, library sciences and was a media specialist for the BIA in New Mexico. They lived around the Gallup area, FT. Wingate, NM was the longest stay before moving back to Anadarko, OK. After Ramon retired from the BIA in the late �80's, Winema continued to work at the Wingate High School till her retirement in 1999. Ramon and Winema moved back to the hometown of Anadarko. She joined various church groups to help others. She also joined the OHCE club, winning blue ribbons for her writing, cooking and quilting. During the long fight with cancer she was involved with the cancer society taking part with cancer walks with Anthony. She also liked to watch Ramon lose money at the Casino while she won. She liked to watch sports and argue with Ramon about his OU team and her OSU team. She also liked talking on the phone to Amanda and bragging about Dana and Shane. Preceded in death by parents George and Lucy McGilby, older sister Galela and twin sister Winona. Survivors include: Husband, Ramon of the home, Son, Anthony of the home Daughter, Amanda and Darrell Joe of Lehi, Utah Grandchildren Dana and Shane Joe of Lehi, Utah Niece and several nephews, extended family and friends in the Anadarko Wake Services: 6:30 pm to 8:30 pm, Sunday October 27, 2019 Funeral Service: 10:30 am Monday, October 28, 2019 United Methodist Church, Anadarko, OK Interment: Ware's Cemetery, west of Anadarko, OK Under the direction of Ray and Martha's Funeral Home, Anadarko, OK

Winema Laura Amauty, 81, of Anadarko, OK was born April 20, 1938 wife of Ramon, mother of Anthony, Amanda, grandmother of Dana and Shane, passed from this world October 24, 2019 in Anadarko, OK. She went to be with her father George Lipscomb... View Obituary & Service Information

The family of Winema Laura Amauty created this Life Tributes page to make it easy to share your memories.