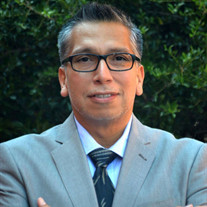 Wilson Charles Daingkau entered into this world as a bright light being born the first child and son of George and LaDonna (Kionut) Daingkau on July 21, 1970 in Lawton, Oklahoma at the Lawton Indian Hospital. His warrior spirit left his body on August 25, 2020 in Wichita Falls, Texas. Wilson was an enrolled member of the Kiowa Tribe of Oklahoma, but was also of Caddo, Pawnee, Delaware, and Catalan descent. He was the grandson of Clyde, Sr. and Mildred (Mausape) Daingkau; John and Irene Kionut and Mae Horn. He was the great grandson of Nahoy Washington Daingkau and Abbie Ki-He-To-Baum-Mah Tanedooah-Daingkau, Rev. Conrad Mausape and Edna Tanequoot-Mausape, George and Edna (Tabbynanuca) Kionut, and Jane Blue Hawk Davis. He was the great-great grandson of Beahko (Fort Marion Survivor), Tanedooah, Tarso-ee, Caddo Mausape, Bofepiah, Tanequoot (Spottedbird), Ahtah-Hoy-mah (Ta-Ah-Bo), Bearno, and Blue Hawk. He was the great-great-great grandson of Ko-Ate-Hain (No Retreat) and Bigbow. Wilson began his undergraduate journey at Oklahoma Baptist University in Shawnee, Oklahoma. He completed this chapter of his education, gaining a degree in Museum Studies at the Institute of American Indian Arts in Santa Fe, New Mexico. Continuing his education, he attended the University of New Mexico's College of Fine Arts, changing his focus to art history - predominantly pre-Columbian / pre-Anglo contact eras. Wilson was chosen as one of 5 curators from the United States to help restore pottery at the Nation Museum of Anthropology in Mexico City, following the earthquake in November 1994. After his educational journey, he was recruited as a museum developer by the State of Oklahoma's Native American Cultural Education Authority for the Ralph Appelbaum Associates, Inc in New York City. Under this position, Wilson helped develop the initial museum content for the Indian Cultural Center and Museum in Oklahoma City. Returning back to Oklahoma, he consulted with Oklahoma tribal programs to identify, catalog and rebury repatriated Native American funerary objects. Through this, he was approached by the Anadarko city manager to help re-open the Anadarko Heritage Museum. After almost a year, he was then asked to help the Anadarko Community Library and became a certified librarian, managing Adult programs and taught for the Oklahoma Department of Libraries. In the Spring of 2017, Wilson championed and established the Oklahoma Native Democrats, the first ever Native federation of the Oklahoma Democratic Party where he was elected to serve as chair. In the Fall of 2018, Wilson became a founding board member of the Oklahoma Indigenous Theatre Company; which hosts the annual New Play Festival for Native writers and actors. Wilson sat on various Anadarko, Oklahoma and other state boards and committees. He was a prolific artist and pianist. He was highly educated and enjoyed using his knowledge to give back to his community and his family. He researched familial bloodlines for all sides of his family and helped others find their own connection to theirs. Wilson was a loving son, brother, uncle, and grandpa to his large extended family but he was especially close to his sister's and brothers' children. He was preceded in death by his father. Wilson Charles Daingkau was survived by his mother, LaDonna and Albert Ryans III of the home; one sister, Kimberly (Daingkau) and Derwin Begay of Tucson, Arizona; two brothers, George and Lindsey Daingkau of Anadarko, Oklahoma; and Daniel Daingkau and fiance Angela Cortez of Ardmore, Oklahoma; three nieces, Sara Johanntoberns, Bethany Daingkau, Hannah Daingkau; two adopted nieces, Aubrey Chaddlesone and Candace Chaddlesone; one nephew, James Johanntoberns; and one adopted nephew, Brenton Chaddlesone. He is also survived by four uncles, Merle Kionut, Jim Horn, Bobby Horn, Lyman Kionut Sr, and Elliott Daingkau; three aunts, Edna Varela, Hazel Silverhorn, June Daingkau, and Helen Eckiwaudah and numerous other family relations, friends near and far. Funeral Service: 11:00am Tuesday, September 1, 2020 First Caddo Indian Baptist Church, Fort Cobb, OK Wake Service: 7:00pm, Monday, August 31, 020 Botone Memorial United Methodist Church, Carnegie, OK Visitation: 1:00pm-8:00pm,Sunday, August 30, 2020 9:00am-5:00pm, Monday, August 31, 2020 Interment: Tabbynanuca Cemetery, Fort Cobb, OK Services under the direction of Ray and Martha's Funeral Home, Carnegie

Wilson Charles Daingkau entered into this world as a bright light being born the first child and son of George and LaDonna (Kionut) Daingkau on July 21, 1970 in Lawton, Oklahoma at the Lawton Indian Hospital. His warrior spirit left his body... View Obituary & Service Information

The family of Wilson Charles Daingkau created this Life Tributes page to make it easy to share your memories.

Wilson Charles Daingkau entered into this world as a bright light...