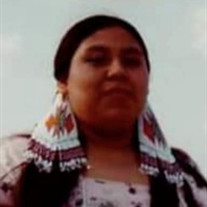 Wilsena Ahboah, age 63, of Anadarko OK was born April 8, 1959 and passed away on Thursday, September 9, 2021. Wilsena was affectionately known to family and friends as "Buckwheat", a name given to her by her brother, George Ahboah. She was challenged since midlife with health issues that combined with the Pandemic, claimed her life. Due to her health issues she required continual care, a duty and responsibility in recent years assumed by her sister Nancy's grandson, Dale Lonelodge and his companion, Courtney Lonewolf. Her brother Ronnie also contributed to this effort. The family is most appreciative for their help. Wilsena was born in Oklahoma City, OK to Wilson and Mildred Ahboah. Her paternal grandparents were Sam and Nancy (Paukie-Pretty Moon) Ahboah. Her maternal grandparents were George and Alice (Witt) Ashley. Her paternal great grandfather was Beahko (Viejo-Old Man, Pausotgoudle or Red Thunder) one of the Kiowa POW's of Fort Marion Florida from 1875-1878. She was an enrolled member of the Kiowa Tribe and of Wichita and Pawnee descent. She attended Grace Fellowship Church, a member of the Native American Church and belonged to the Esa Rosa "Whitewolf Club". Wilsena lived in Oklahoma City in her early years then moved to Anadarko. Years ago, it was a practice among some Kiowa families to retain some children from school. She was one of the last. Despite that, she was considered by family to be highly intelligent. Her parents were powwow dancers so she participated with them throughout the United States. They were regular participants for years at the "Indian Village", with the Billy Evans Horse dance group, at Cheyenne Wyoming, "Frontier Days". She didn't have an Indian name, and one of her favorite stories was when one of her favorite nephews, Joe Medrano Jr., in humor, gave her the name "Elk Woman". It never failed to amuse her and family when she told this story. She was greatly saddened upon his passing. She loved to play games (bingo, casinos), coloring, and watching wrestling on TV. She loved spending time with her grandkids and especially sharing her candy with them. Her favorite drink was Pepsi and when the doctor said "no more' pop and candy, she still managed to sneak them. She was much beloved by family and friends, and was a very kind and generous person. Her great smile and laughter will be missed by all. She shared more than twenty years with the love of her life, Willie Huber. They separated but remained friends until her passing. Survivors include: Brother's: Ronnie Ahboah of the home, Donnie Ahboah (Fannie), Fort Defiance, AZ, Gene Ray Ahboah (Terry), Oakland, CA Sister: Debbie Ahboah (Joe Bob), Anadarko, OK Grandson Dale Lonelodge and companion Courtney Lonewolf and their children Daylen, and Kiya Lonelodge of the home Loved by a host of many friends, and relatives Preceded in death by: Parents; Brother George Samuel Ahboah; Sisters, Norma Carol Wahnee and Nancy Lonelodge; nephew, Norman Frank Brown; nieces, Velma Lonelodge and Alice Lonelodge. Wake: 6:00 p.m. - 8:00 p.m., Tuesday, September 14, 2021 Ray and Martha's Funeral Home Chapel, Anadarko, OK Graveside: 11:00 a.m., Wednesday, September 15, 2021 Memory Lane Cemetery, Anadarko, OK Visitation: 9:00 a.m. - 8:00 p.m., Monday, September 13, 2021 Ray and Martha's Funeral Home, Anadarko, OK Under the direction of Ray & Martha's Funeral Home-Anadarko, OK

Wilsena Ahboah, age 63, of Anadarko OK was born April 8, 1959 and passed away on Thursday, September 9, 2021. Wilsena was affectionately known to family and friends as "Buckwheat", a name given to her by her brother, George Ahboah. She was... View Obituary & Service Information

The family of Wilsena Sue Ahboah created this Life Tributes page to make it easy to share your memories.