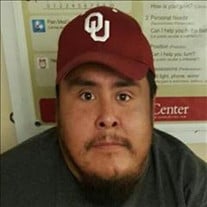 William Harrison Bointy, 46, was born on July 22, 1974 to Hess and Linda (Slinker) Bointy in Oklahoma City, Oklahoma. He passed away on April 18, 2021 at Integris Baptist Medical Center in Oklahoma City, Oklahoma. He grew up in Oklahoma City, Oklahoma before moving to Carnegie where he graduated from Carnegie High School with the Class of 1992. While in school, he played for the football team and was also a manager for the 1992 Basketball Championship team. After high school, he attended Haskell Indian Nations University, transferring after a few years to Cameron University where he studied Business Administration. William briefly worked as a stocker and a butcher for the Walmart in Anadarko, Oklahoma. William was a member of the Kiowa Tribe of Oklahoma and Kiowa Tia-Piah Society. He was a Red Tipi and Stumblingbear descendant. William was a life-long, avid Dallas Cowboys and OU Sooners fan - never missing a home game or playoff game. William was a man of quiet and shy demeanor, but he had the warmest and kindest heart. He never met a stranger and would gladly give someone the shirt off of his back if they needed it. He will be deeply missed by all who had the privilege of knowing him. William is survived by two uncles, Ed Slinker, Charles Slinker, both of Oklahoma City, Oklahoma; three aunts, Edna "Fuzzy" Bointy of Anadarko, Oklahoma, Betty Seidner, Oklahoma City, Oklahoma, Pat Franceschini, Hollywood, Florida; two special nephews, Robert Sink Jr., Chickasha, Oklahoma, Shawn Slinker, Carnegie, Oklahoma; numerous cousins, nephews, and nieces. William was proceeded in death by his parents; paternal grandparents, Bill and Sallie (Hokeah) Bointy; maternal grandparents, Raymond and Dorena (Jones) Slinker; uncles, Vincent, Jack, Wallace, Daniel, Joe Bill Bointy, Archie Curley; aunts, Charlotte Doxtator, Donna Gardner, Mary Josh, Billie Rose; cousins, Anthony Slinker, Hoke Bointy, Karon Wells-Turtle. Graveside services for William Harrison Bointy will be at 10:00a.m. on Friday, April 23, 2021 at Carnegie Cemetery in Carnegie, Oklahoma. The family requests that face masks be worn and social, distancing be practiced. Under the direction of Ray and Martha's Funeral Home in Carnegie, Oklahoma.

The family of William Harrison Bointy created this Life Tributes page to make it easy to share your memories.