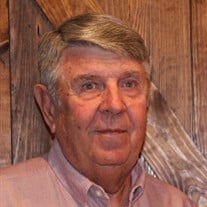 Wayne Leon Patterson was born to Elmo and Oleta (Bryant) Patterson on August 21st, 1945. He passed away May 28th, 2021 at the age of 75 in his hometown of Carnegie, Oklahoma. Wayne attended school at Carnegie and later graduated from Anadarko... View Obituary & Service Information

The family of Wayne Leon Patterson created this Life Tributes page to make it easy to share your memories.