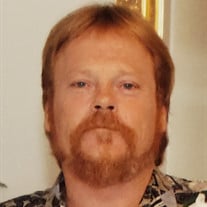 Wayne "Butch" Alvin Harlan, Jr, 66, of Anadarko passed away unexpectedly on Monday, March 16, 2020 at his home in Anadarko. He was born on September 19, 1953 to Wayne Alvin, Sr and Thelma Faye (Long) Harlan in Denison, TX. Butch's father worked in construction and moved his family where the work was. Because of this, Butch and his siblings had the opportunity to live in places such as California, Hawaii, and Washington State. His family lived in Washington State before moving to Oklahoma, and in 1972, Butch graduated from Anadarko High School. After he moved to Oklahoma, Butch met the love of his life, Marla Lee and on June 17, 1972, they were married. From this marriage came two children, Eric Wayne and Jill Briann. Butch worked in the construction industry and was also a carpenter. He enjoyed working on old cars and refurbishing old guns. Butch loved his family very much. He especially loved spending time with his grandchildren. He will be deeply missed by all that knew and loved him. Butch was preceded in death by his parents Wayne, Sr. and Thelma Harlan. He is survived by his wife, Marla, of the home. One son, Eric Harlan and his wife Jennifer of Anadarko, OK. One daughter, Jill Brown and husband Clifton of Southern Pines, NC. Four grandchildren, Brooklyn Harlan and Bridge Harlan of Anadarko, OK. Avery Brown and Alexander Brown of Southern Pines, NC. Three sisters, Margaret Coleman and husband Stormy of Wasilla, AK. Judith Taylor and husband Jackie of Anadarko, OK. Shirley Kinder of Temple, OK. Butch is also survived by a number of nieces, nephews, uncles, aunts, and cousins. Services will be held at a later date.

The family of Wayne Harlan, Jr. created this Life Tributes page to make it easy to share your memories.