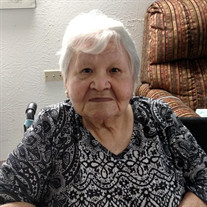 WANDA BOWMAN MATLOCK Graveside services for Wanda J. Stephens Bowman Matlock, 87 of Chickasha formally of Anadarko will be held at 10:00 A.M. on Friday, February 26, 2021, at the Wichita Tribal Cemetery north of Anadarko, under the direction of Ray and Martha's Funeral Home. Visitation/viewing will take place on Thursday, February 25, 2021, at the funeral home from 9:00 A. M. to 8:00 P.M. She was born on December 26, 1933, on an allotment North of Anadarko to Oscar and Martha (Kiddahwaddy) Stephens. She passed peacefully with family by her side on February 22, 2021 at Grady Memorial Hospital in Chickasha, Oklahoma. She was a member of the Wichita and Affiliated Tribes, serving as Wichita Princess in 1947 and 1948. She attended Riverside Indian School where she met the Father of her children, John W. Bowman Sr., they married and eventually moved to New Mexico. They were blessed with 6 children, 3 boys and 3 girls. While raising children, she learned to drive and eventually earned her GED. She worked in various locations on the Navajo Reservation as a dorm matron, while attending college. She eventually moved back to Oklahoma and finished her education obtaining a bachelor's degree from the University of Science and Arts of Oklahoma. She later married Donald Matlock who preceded her in death. She was a strong woman of incredible faith and endurance. She raised her children along with a Grandson, she survived cancer, but unfortunately, she suffered a stroke that left her with limited mobility and speech. She is survived by her Children, Ernestine Bowman Titchywy of Oklahoma City, Delana Bowman Taylor and Alan Bowman, of Anadarko. Her sister, Carla Niastor Jonathan of North Carolina. Grandchildren, John W. Bowman III (whom she raised from birth) and wife, Jamie of Chickasha, Delano S. Barney and wife, Morgan of Anadarko, Lorenzo Franco Jr., of Anadarko, Dawnie E Frank of Phoenix Arizona, Jesse Taylor of Anadarko, Ernestine and Alan Bowman of Montana, Dan Titchywy and Wife, Teresa of Dallas, Texas. Great-Grandchildren, Julissa, Christopher, Lauren, Nicholas, Thunder, Jaxon, Hillery, Noah, Emmitt, Lora, Scout, Anderson, Carly, Francis, Alan Ross, Timber, Nathaniel and Shiloh, along with many nieces and nephews. She is preceded in death by her spouse, Donald Matlock, her children's father, John W. Bowman Sr. Her children, Melva Y. Bowman Franco, John W Bowman Jr., and Alfred Ross Bowman. Her Son in laws, Myron Taylor and Bill Titchywy and daughter in law, Lora Charley Bowman. Her parents Oscar Stephens and Martha Kiddahwaddy Reeder. Her siblings, Vivian Stephens McCurdy, Delano H, Stephens, Murray Niastor and Doris Jean Brewster.

WANDA BOWMAN MATLOCK Graveside services for Wanda J. Stephens Bowman Matlock, 87 of Chickasha formally of Anadarko will be held at 10:00 A.M. on Friday, February 26, 2021, at the Wichita Tribal Cemetery north of Anadarko, under the direction... View Obituary & Service Information

The family of Wanda Joan Matlock created this Life Tributes page to make it easy to share your memories.