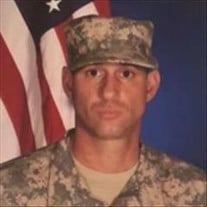 Walter "Walkie" Vaughan Nix Jr., 49, was born on March 23, 1972 to Walter Nix Sr. and Jimmie Lee (Stanford) Nix in Hugoton, Kansas. Walter passed away on September 10, 2021 at Comanche County Memorial Hospital in Lawton, OK. Walkie grew up a huge sports fan. He loved playing football, basketball, and running track. He excelled at every sport he played. When he wasn't playing sports, he was watching them. He loved the Oklahoma Sooners and made sure he found a way to watch every single game. As Walkie grew to an adult, he got married and had four children, whom he loved watching play sports, as well. He was very proud of all of them and would often brag to everyone about how great they were at everything they did. Aside from playing and watching sports, Walkie loved to be outdoors, especially spending time fishing. Even a relaxing activity brought out Walkie's competitive side. If he wasn't trying to outfish the people fishing with him, he was trying to outdo the last time he went fishing. He loved to show off his new lures or reels and describe what kind of bass he was going to catch with them. Walkie joined the United States Army in 2008, and it appealed to his love of being outdoors. While boot camp is tough for everyone it has to be even tougher when you join in your mid-thirties, but Walkie persevered and served almost 6 years, serving in Afghanistan for six months. Walkie was a parachute rigger in the army and part of his requirements including being airborne qualified and doing jumps, which he really enjoyed. Walkie was always a daredevil and jumping out of planes was right up his alley. Walkie loved to be with friends and family. He brought energy and fun to every room he walked into and wanted everyone else to enjoy visiting as much as he did. He will be sorely missed by everyone that knew him. Survivors include his wife: Charlotte Nix of Carnegie, OK Children: Aspen Nix of Clinton, OK Hannah Nix of Clinton, OK Walter Nix III of Weatherford, OK Alexa Nix of Clinton, OK Brother: James Randall and his wife, Autum of Duncan, OK Nephew: Corbyn Randall of Duncan, OK Nieces: Hannah Willis of Duncan, OK Meilani Randall of Duncan, OK Numerous other friends and family members. Preceded in death by his father, Walter Nix Sr.; mother, Jimmie Lee Randall; step-father, Bob Randall. Inurnment: 10:00a.m., Friday, September 17, 2021 Carnegie Cemetery Carnegie, OK

The family of Walter "Walkie" Vaughan Nix, Jr. created this Life Tributes page to make it easy to share your memories.