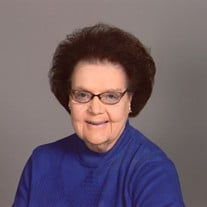 Virginia Rose McCollom went to her heavenly home on July 20, 2021. She was born on October 16, 1936 to Clarence Robert Logan and Neva Lorene (McVicker) Logan, in Hennessey, Oklahoma. As a child Virginia attended school in Nardin, Hurley, and Deer Creek, Oklahoma. She was a Deer Creek High School graduate. After graduating high school, she pursued a career in nursing. She attended Nursing School at Enid General Hospital in Enid, Oklahoma and graduated on September 20, 1957. The day after graduation she married the love of her life Dale Lee McCollom. Dale was in the Air Force at the time so she traveled with him and worked in several different hospitals. Virginia was dedicated to caring for others, so nursing was the perfect career for her. After they were married Dale and Virginia moved to Big Springs, Texas and right away Virginia began practicing nursing. The couple welcomed their son Ricky Lee McCollom into the world on May 5, 1960. In 1961, they moved to Elmendorf Air Force Base in Anchorage, Alaska where Virginia worked at the hospital. On January 23,1964, their daughter Kimberly Ann McCollom was born and completed their little family. The family moved from Anchorage, Alaska to San Angelo, Texas in 1964. Virginia practiced nursing while they were there, as well. In 1968, Dale was stationed in Thailand. While Dale was overseas, Virginia and the children lived in Oklahoma City, Oklahoma. Virginia continued her nursing career at Deaconess Hospital during their stay in Oklahoma City. The family moved to Altus Air Force base in 1969 after Dale returned home from Thailand. Dale retired from the Air Force on June 1, 1971 after serving twenty years. They made their family home in Con 8 located west of Roosevelt, Oklahoma. After retirement Dale farmed and Virginia's nursing career took off. She worked for several years at Elkview General Hospital and in the office of Dr. Mask in Hobart, Oklahoma. For the bulk of her career, Virginia was the Kiowa County Health Nurse where she served for over 27 years. She was known as "the shot lady" as she gave countless vaccinations to children and adults. Virginia retired from the Kiowa County Health Department on October 31, 2005, and soon went to work for Home Health of Elkview in Hobart, Oklahoma. Virginia made her home in Hobart, Oklahoma in 2006 when Dale moved to the Veteran's Center in Clinton, Oklahoma. She lost the love of her life in November of 2007. Virginia continued working for Home Health of Elkview for several years and was over eighty years old the last time she renewed her nursing license. She was a true public servant and served in the nursing field for over 60 years. After she gave up nursing, Virginia enjoyed reading and faithfully worked on her Sunday School lessons. She served on the kitchen committee at her church where she was always willing to lend a helping hand. Her greatest love of all was her family! She loved them all! She was very involved with her grandchildren who referred to her as Mema all throughout their lives. She was promoted to great-grandma and that made her world complete. Virginia was referred to as Mema by all who knew her and it wasn't uncommon for her to answer to Mema when spoken to by someone that wasn't family. She loved everyone and had a way of making everyone around her feel special. Mema was one in a million, OKAAY! Virginia is survived by her son Ricky McCollom and wife Tammy, her daughter Kimberly Binghom and partner Keith Miller all of Hobart; grandson Blake Binghom, wife Destiney, and their sons Brantlee and Bryker; granddaughter Bess Smith, husband Jason and their daughter Logan; granddaughter Hannah McCollom and partner Kanon Kuch all of Hobart; granddaughter Jessica Williams, husband Heath and their daughters Jaedyn and Jordyn, all of Lone Wolf; granddaughter Victoria Giblet, husband Zane, and their children Marya, Alysa, Lily, McKinley, and Maverick all of Rocky; grandson Ben Smith and wife Kaylee of Hobart; granddaughter Chandler Childers and husband Cole of Altus; grandson Deaton Smith and wife Taylor of Weatherford; brother Carl Logan of Ponca City, sister Mary Ann Jennings of Oklahoma City, sister Janet Trenary and husband John of Blackwell, sister-in-law Earlene Logan of Ponca City, along with numerous nieces, nephews and cousins. Virginia is preceded in death by her parents Clarence Robert Logan and Neva Lorene (McVicker) Logan, husband Dale McCollom, brother Clarence Jr., daughter-in-law Teresa McCollom, and infant grandson Barton Lee McCollom.

Virginia Rose McCollom went to her heavenly home on July 20, 2021. She was born on October 16, 1936 to Clarence Robert Logan and Neva Lorene (McVicker) Logan, in Hennessey, Oklahoma. As a child Virginia attended school in Nardin, Hurley, and... View Obituary & Service Information

The family of Virginia Rose McCollom created this Life Tributes page to make it easy to share your memories.

Virginia Rose McCollom went to her heavenly home on July 20,...