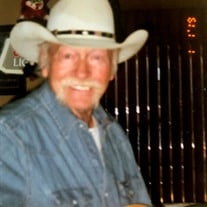 Verril Brewer Sr., age 77, passed away on Tuesday, March 24, 2020 at his home in Lawton, Ok. He was born January 22, 1943 to Sybilene (Holloway) Robert Brewer in Wellington, Texas. He grew up in Texas and joined the Us Army as a Private in 1960. When stationed in Germany he married Veronika Zapf on February 7, 1964. They had three children Verril Jr., David and Angela. His military decorated service including two tours in Vietnam and one Dessert Storm lasted 32 yrs. He retired in Lawton, Ok in 1992 as a CW4 Field Artillery Maintenance Officer. After retiring from the Army he worked at ITT on Ft. Sill, in security at several local casinos, selling and restoring cars, trucks and trikes, and as a Training Lieutenant at the Lawton Correctional Facility. Often known as Chief, Tex or Big B, he enjoyed racing at the lawton speedway, and was a fan favorite for many years as number 77. Hobbies included fishing, playing pool, the guitar and spoiling his grandchildren and dogs. He always had a story or joke and his uplifting personality will be remembered by everyone. With deep sadness we are sorry to announce that services will be held at a later time. He was preceded in death by his parents Sybilene and Robert, brothers Virgil, Bill, Clifton, Sonny. Survived by his wife of 56 yrs Veronika, three children Verril Jr. and wife Tammy, David, Angie and husband Matt Robinson. Along with grandchildren Steven, Daniel, Aleta, Aurora, Lance, Reagan, Mace, Cash and three great grandchildren Jack, Aurelia, Tamiem. His brothers and sisters Boyd, Robert, Bobby, Billy, Linda, Edna, Patricia Graveside Service: 1:00 pm. Wednesday, March 24, 2021 Fort Sill Nation Cemetery, 2648 NE Jake Dunn Rd, Elgin, OK 73538

The family of Verril Brewer, Sr. created this Life Tributes page to make it easy to share your memories.