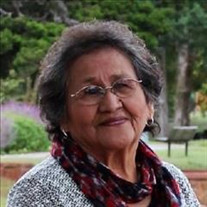 Deanna Joyce (Yellowhair-Toppah) Ewoldt, 80, passed from this life to be present with her Lord and Savior Jesus Christ on Sunday September 6, 2020. Deanna, beloved wife, mother, sister, grandmother, Aunt (Annie) and "Ah-Phee" was born November 29, 1939 at the old homestead of Bertha Sunbeak (Midwife) east of Carnegie, OK. She was the third oldest of nine children born to Beverly John Yellowhair Toppah and Lucille Ataddlety Toppah. She was an enrolled member of the Kiowa Tribe of Oklahoma. Her paternal grandparents were Samuel L. Yellowhair (Audle-goot-'Ko) Toppah (Tdo-po-odle), Kiowa and Julia (Tain-Peah), Kiowa. Maternal grandparents were Joe Joco (Gaw-Key) Ataddlety, Kiowa and Kla-Koo-Cha, Kiowa/Apache enrolled Kiowa. Deanna attended several elementary schools in Oklahoma including Fort Cobb, Carnegie, Riverside Indian School and St. Patricks Indian Mission School in Anadarko, OK. She moved with her parents to St. Loius, Missourri and attended junior high school at St. Francis Xavier Catholic School. Her high school years were spent at Chilocco Indian School until 1959. She lived and grew up in the country between Fort Cobb and Carnegie then moved to Hobart. Later years she moved to Lawton, OK where she met Loyal Ewoldt of Cedar Rapids, Iowa. On June 4, 1964 they were married by Rev. Robert Choate at the Comanche Reform Church in Lawton, OK and she became a military wife for the next 20 Years. They were married until he passed away in 1999. In this marriage, They were blessed with two sons, James Murphy Ewoldt and Leland Ewoldt. One Daughter, Kayrene Ewoldt Chavez. The greatest joy of her life were her five grandchildren, Gavin, Brianna, Ceason, Isabella and Sabrina. Six Great-grandchildren, Taylor, Mila, Xavier, Riley, Lyric and Bella. She was cherished by numerous nieces and nephews and those that married into the family. Deanna regularly attended and was blessed by Grace Christian Fellowship Church in Anadarko. She also enjoyed camping and cooking out at the Kiowa Gourd Clan celebration and "looking on". Throughout her husband's military years, she and their children transferred with him and lived overseas and at several military installations throughout the states. After his retirement in 1979, they made their home in Moore, OK and Norman, OK. In 1982 Deanna was employed at the Moore-Norman Technology Center in the Business and Industry Services Department. After her retirement in 2003, she moved to Anadarko, OK. Deanna loved to sew and do bead work, make Indian style shawls, cloth dresses, beaded moccasins and leggings, and made numerous blankets for newborn babies. She loved to cook Indian Style!! Deanna always looked forward to cooking for big family holiday dinners each year. Graveside Service: 10:00 am Thursday, September 10, 2020 Cedar Creek Cemetery, Carnegie, OK Visitation: 6:00 pm - 7:00 pm Wednesday, September 9, 2020 Ray and Martha's Funeral Home, Anadarko, OK Lunch will be served at Grace Christian Fellowship in Anadarko following the graveside service. Under the direction of Ray and Martha's Funeral Home, Anadarko.

The family of Deanna Joyce Ewoldt created this Life Tributes page to make it easy to share your memories.