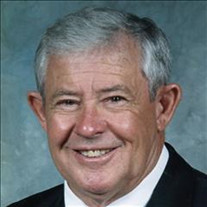 Trulan and his twin brother Truman were born December 9, 1939 at Carnegie, Oklahoma to Jewel and Maurice Clark. Trulan passed away on November 29, 2020 in Oklahoma City, Oklahoma at the age of 80-years-old. Trulan attended school at Mountain View, later attaining his GED. In 1957, he married Sharlene Eskew and to this union two boys were born: Michael Dean (1957) and Darren (1959). In 2000, he married JoEtta Caid. Trulan was involved in farming and ranching in Mountain View area along with custom combining with his brothers. He was in equipment sales and a John Deere dealer in southern New Mexico. During these fifty-five years, he was a dedicated servant of the Lord and evangelized and pastored in churches in Oklahoma and New Mexico, leading countless numbers of people to the Lord. Trulan never met a stranger. He was a loving husband, father, and grandpa. He and Darren were best buddies. Trulan is survived by his wife, JoEtta of the home; one son, Darren Clark and his wife, Vanessa; stepchildren, Michael Armitage and his wife, Stacey, Carrie Armitage Adkins and four grandchildren all of Yukon, Oklahoma; two brothers, Truman Clark of Eufala, Oklahoma, Don Clark of Mountain View, Oklahoma; three grandchildren, Toni Newton and her husband, Justin, Erin Hooper and her husband, Kevin, Cole Clark and his wife, Brittany all of Mountain View, Oklahoma; six great-grandchildren; numerous nieces, nephews, and cousins. Trulan is preceded in death by his son, Michael; parents; brothers, Marion and Marvin; sister, Eula Fay Emory; grandson, Darren Van. Funeral services will be private followed by a public graveside service on Wednesday, December 2, 2020 at 2:00pm at Mountain View Cemetery. Officiating will be Rev. Toni Newton assisted by Rev. Bobby Stewart. Under the direction of Ray and Martha's Funeral Home in Carnegie, Oklahoma.

Trulan and his twin brother Truman were born December 9, 1939 at Carnegie, Oklahoma to Jewel and Maurice Clark. Trulan passed away on November 29, 2020 in Oklahoma City, Oklahoma at the age of 80-years-old. Trulan attended school at Mountain... View Obituary & Service Information

The family of Trulan Dean Clark created this Life Tributes page to make it easy to share your memories.

Trulan and his twin brother Truman were born December 9, 1939...