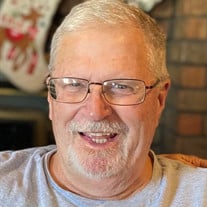 Tommy Ray Sparkman, 68, was born on August 31,1953 in Anadarko, OK. He passed away peacefully on January 14, 2022 with Shelly by his side. On August 12, 1972 Tommy married his high school sweetheart, Shelly Williams at the Virginia Avenue Baptist Church in Anadarko, OK. Shelly was the love of his life, she was his everything. Together they shared many wonderful experiences seeing the world, camping at the lake, and traveling many miles to watch Angie cheer and Kevin play baseball. They worked side-by-side to make their dreams come true and enjoyed each other all the days of his life. He was an incredible husband, father, pops, and cherished Shelly wholeheartedly. Tommy and Shelly had two children who were their pride and joy. Angela Koch and Kevin Sparkman. They have three grandchildren that are their whole world. Pop's princess, Shayna Raye Gibson, an OSU graduate currently working on a second bachelor's degree in nursing, Kale Nixon Koch who shares so many of his Pop's features, intellect and his interest for history, and Kamden Reye Sparkman who shares Pop's passion for baseball, farming, hunting, and fishing. Tommy graduated from Anadarko High School in 1971. He was on the 1970 state baseball team and in 1971 he was awarded All-State in football. Tommy dearly loved to farm. Hunting and fishing were his passion. He was fortunate enough throughout his life that he was able to hunt the mountains of Colorado and fish the lakes of Mexico with his son and all his wonderful friends. One of his greatest adventures was sorting cattle on his horse, Blackjack. He did this over hundreds of acres in Wyoming with his best friend, Fon Stonum. From the start of their friendship these two were a pair and named each other "Birdhead". He looked forward to the days Fon would come and stay with him. It was such a highlight to have him reminisce and even stir up some more adventure. He love to watch the OU football games and could hardly wait for his buddy, Steve Peck to get to the house to analyze the games. He cherished that Steve made time to just sit and visit. Tommy was born a worker. At just 19 years old, he began his career at Western Farmers Electric Cooperative. At WFEC, he walked the floor of the power plant daily until the day he retired. He worked in several positions throughout the years and with his experience and hard work became the power plant manager. He traveled across the United States and Canada to seminars for educational training, and of course Shelly went with him. In 2014, after being just shy of 40 years of service Tommy retired due to his ongoing fight with Parkinson's. He is preceded in death by his parents; Douglas Mciver and Ruth Sparkman; maternal grandparents, Bill and Flora Hitt; paternal grandparents, Mciver and Luvertia Sparkman; brother, Douglas Sparkman Jr.; uncle and aunt, Carl and Noni Hitt; his mother-in-law, Oneta Williams. He is survived by his wife, Shelly Sparkman of the home. Daughter: Angela Koch and grandchildren; Shayna and Kale of Anadarko, OK Son: Kevin Sparkman and grandson Kamden and Kera Phillipi of Tuttle, OK Father-in-law: Truman Williams of Anadarko, OK Brother and Sister-in-law: Jerry and Julie Williams of McKinney, TX Brothers: Terry and Sandra Jo Sparkman of Cyril, OK and Steven and Penny Sparkman of Anadarko, OK Numerous cousins, nieces, nephews, and wonderful friends. "LIFE IS NOT MEASURED BY THE NUMBER OF BREATHS WE TAKE, BUT BY THE MOMENTS THAT TAKE OUR BREATHE AWAY". Visitation: 1:00 PM - 8:00 PM Sunday, January 16th, 2022 9:00 AM - 8:00 PM Monday, January 17th, 2022 Funeral Service: 3:00 PM Tuesday, January 18th, 2022 First Baptist Church, Anadarko, OK Interment: Memory Lane Cemetery, Anadarko, OK Under the direction of Ray and Martha's Funeral Home Anadarko, OK

Tommy Ray Sparkman, 68, was born on August 31,1953 in Anadarko, OK. He passed away peacefully on January 14, 2022 with Shelly by his side. On August 12, 1972 Tommy married his high school sweetheart, Shelly Williams at the Virginia Avenue... View Obituary & Service Information

The family of Tommy Ray Sparkman created this Life Tributes page to make it easy to share your memories.