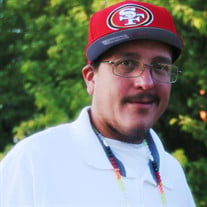 Thomas Mauchahty-Ware III, 37 of Anadarko, OK, passed away Friday April 23, 2021. He was born April 28, 1983 to Thomas Mauchahty-Ware II and Jocelyn Lanell LittleChief at Lawton Indian Hospital. Thomas grew up on Ware Road and attended Broxton Elementary in his younger years. His family later moved to Anadarko where he would eventually graduate from the Anadarko High School in 2001. After graduating high school he went on to attend The University of New Mexico, The University of Oklahoma and Cameron University where he would graduate from in 2009 earning his Bachelors Degree in Engineering Design. Thomas was a well-known Fancy War Dancer and spent a lot of time traveling and performing with his Dad in the American Indian Dance Show; in his later years he carried on the tradition with the American Indian Dance Show with his own children. Some of the places he performed at were the Denver Indian Art Market, Texas Art Market, Kansas City Art Market, Boston Folk Festival, Summer Olympic in Atlanta, GA, Smithsonian Art Museum, Kennedy Center for the Performing Arts, Peabody Museum, Branson, MO, and to Germany. Thomas loved working for and with the native youth which was his passion. He believed cultural knowledge and education was the key to changing the Native American community for the next generations. He impacted so many lives through the teaching of cultural classes, beading workshops, regalia making classes, and drum stick making all over Indian country. Thomas also mentored a group of men with the formation of their drum group, the TNA/Southern Nation while working for the Tradition Not Addiction Program at the Cheyenne and Arapaho Tribes. Thomas was currently employed by TalkJive where he was an online personality and producer. Thomas was a well-known advocate for Native Americans and was ready to help to better the Native American community to the best of his abilities. He loved to share his stories and experiences while traveling with his father with everyone. In later years, he became a very respected and talented rapper and hip-hop artist. Through his many talents, advocacy and social life, he was always a very devoted father to his 6 beautiful children, whom he loved more than anything. He was their #1 fan in life and was often seen in the stands cheering them all on at their numerous sporting events. He is survived by his best friend and beautiful mother of his children, Wansey Beaver of El Reno, OK and 6 children, Donahven Beaver, Thomas Mauchahty-Ware IV, Malahkie Beaver-Ware, Mattie Beaver-Ware, Dezee Beaver-Ware and Tahnee Beaver-Ware all of the home. Mother, Jocelyn LittleChief of the home. Sisters Magpie Ware, companion Bryanne Isaacs of Lawton, OK, Jocelyn Clarene Ware of Del City, OK and Laura Bryson of Alaska . Also survived by numerous nieces and nephews, a new grandson Jayce Hummingbird-Beaver and special granddaughter, Paizlee Wade Williams. Thomas is proceeded in death by his father,Thomas Mauchahty-Ware II; his niece Hannah Ziegenfuss; his maternal grandparents, Paul and Lanell LittleChief; and his paternal grandparents Wilson Ware and Pearl Pewo-Ware. Prayer Service: 6:00 pm- 9:00 pm, Thursday, April 29, 2021 First Baptist Church, Anadarko, OK Funeral: 11:00 am, Friday, April 30, 2021 First Baptist Church, Anadarko, OK Burial: 1:00 pm, Friday, April 30, 2021 Ware's Cemetery, Anadarko, OK Visitation: 9:00 am - 8:00 pm, Wednesday, April 28, 2021 9:00 am - 4:00 pm, Thursday, April 29, 2021 Ray and Martha's Funeral Home, Anadarko, OK Under the direction of Ray and Martha's Funeral Home, Anadarko, OK

The family of Thomas Mauchahty Ware, III created this Life Tributes page to make it easy to share your memories.