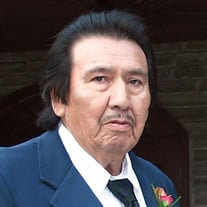 TERRY WETSELLINE FORT COBB � Graveside services for Terry "Kraz" Wetselline, 75, of Fort Cobb will be held at 11 a.m. Monday, Dec. 21 at the Redbone-Tselee family cemetery with the Rev. Tim Nestell officiating. Viewing of the body will be from 1 to 8 p.m. Saturday, Dec. 19 and from 1 to 6 p.m. Sunday, Dec. 20 at Ray & Martha's Funeral Home in Anadarko. Terry was born June 6, 1945 in Lawton to Henry and Susie (Redbone-Tselee) Wetselline. He grew up in Gawkey Creek outside of Fort Cobb at his family's home place. He attended Fort Cobb Public Schools and later joined the United States Air Force. While serving, he played for the United States Air Force softball team and traveled to many different places. During that time he would've met up with his older brother, Phillip "Bodie" in 1965 in Monroe, La., who was also serving. Later, when he was discharged from the Air Force, he played for various softball teams, traveling all over the U.S. He was fortunate to have played in multiple world tournaments. He worked for the railroad, the Bureau of Indian Affairs, and as security at Riverside Indian School in Anadarko. Terry was a proud member of the Apache Tribe of Oklahoma, Apache Blackfoot Society, Apache Native American Church, and served several years as commissioner of the Apache Housing Authority. He enjoyed watching his kids and later grandkids play sports. Traveling with his wife, Helen, he went near and far supporting his grandkids in everything they did. No matter what it was or where it was he was always there. They were his pride and joy. He is survived by his kids, Birdie Wetselline of Fort Cobb, Stephanie Pahcoddy and husband Glenn of Apache, AJ Wetselline of Anadarko, Bonita Wetselline of Montana, Lisa Wetselline, Bo Wetselline and wife Carol, all of Anadarko, Susie Ahdokobo and husband Rudy of Mountain View, and Marian Ramriez, Anadarko, His siblings, Phillip "Bodie" Wetselline, Barry "Germ" Wetselline, Hugh "Sam" Redbone, Eva "Dot" Wetselline and Martha Koomsa Perez. He was preceded in death by his parents; his wife Helen; his brothers, James, Gerald and Leroy Nimsey, and Arnold, Ronald, Keith A. and Kenneth Wetselline, and his sisters, Iris Walker and Zola Wetselline.

TERRY WETSELLINE FORT COBB &#65533; Graveside services for Terry "Kraz" Wetselline, 75, of Fort Cobb will be held at 11 a.m. Monday, Dec. 21 at the Redbone-Tselee family cemetery with the Rev. Tim Nestell officiating. Viewing of the body will... View Obituary & Service Information

The family of Terry Lee Wetselline created this Life Tributes page to make it easy to share your memories.