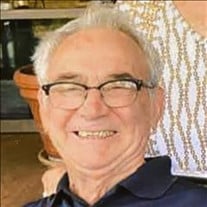 Terreld "Terry" Gene Thiessen, 81, was born on September 10, 1940 to Toni and Sybel (Havens) Thiessen in Cordell, Oklahoma. Terry passed away on September 16, 2021 surrounded by his loved ones in his home in Clinton, Oklahoma. Terry was born and raised in Cordell, Oklahoma, where he attended and graduated high school. Terry met the love of his life, Laverne Young, during his high school years. They married shortly after Laverne graduated high school on September 13, 1959. This union blessed them with two children. In his younger married life, Terry worked for Safeway as a market manager. He later opened up a business with friends called The Shoe Shack. Once The Shoe Shack closed, Terry went to work for American Fidelity for a total of twenty-nine years until his retirement in 2003. While he worked for American Fidelity, Terry and Laverne had many opportunities to travel the world through the company. They went many places such as Canada, Mexico, London, Bermuda, and Hawaii several times over. Terry loved his work because of his love for people, often noted for his charisma and coined the life of the party at all events. Another love of Terry's was his family. He was known as "Papa" to all his grandkids. He made sure to give every grandkid a nickname, even if it sounded silly. He always made sure to spend plenty of time with each and every one of his family members, teasing them and getting them to laugh. Survivors include his wife: Laverne Thiessen of the home Son: Keith Thiessen and wife, Ranae of Cordell, OK Daughter: Tracy Hardy and husband, Todd of Spring Hill, TN Grandchildren: Brady and Lacey Biddy of Elgin, OK Tiffany Thiessen of Cordell, OK Allee Thiessen of Weatherford, OK Tanner Hardy of Spring Hill, TN Great-Grandsons: Baron and Weston Biddy of Elgin, OK He was preceded in death by his parents, Toni and Sybel Thiessen; brother, Russell; sister, Ramona. The family will be having private services. Under the direction of Ray and Martha's Funeral Home, Cordell, OK.

The family of Terreld "Terry" Gene Thiessen created this Life Tributes page to make it easy to share your memories.