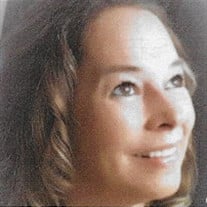 Teresa "Teri" L Alexander, age 55, of Bourbon, Missouri, passed away Monday, January 7th, 2019 at Missouri Baptist Hospital in Sullivan, MO. Teri was born on April 30th, 1963 to George E. Montgomery, Sr. and Jackie (Shannon) La Liberte in Oahu, Hawaii. while her father was stationed in the Navy. Teri attended Cordell High School and later met Greg Alexander in Clinton, Oklahoma and they were married on April 4, 1996. They made their home in Oklahoma until 1997 when they moved to the Bourbon area. Teri was employed as a waitress and in the healthcare industry as a caregiver. Teri was a selfless, caring person and a wonderful mom. She enjoyed spending time with her grandchildren, family and friends, along with cooking, playing with her dogs, camping, swimming. She was very loved by her family and many friends. Teri is survived by her husband, Greg Alexander of Bourbon, MO 2 Sons: Aaron Spain & wife Jessie of Sullivan, MO Chris Dodge of Tulsa, OK Mother: Jackie La Liberte of Reynoldsville, PA 4 Grandchildren: James Spain, Gabriella and Adrian Silver, and Alexander Johnson Brother: George K. Montgomery of Hydro, OK Numerous nieces, nephews, other relatives and many friends. Teri was preceded in death by her father, George E. Montgomery Sr., Brother: Michael Montgomery, and Step-Father: Eugene La Liberte. A memorial service will be held at a later date in Cordell, Oklahoma Under the direction of Ray & Martha's Funeral Home-Cordell

The family of Teresa L Alexander created this Life Tributes page to make it easy to share your memories.