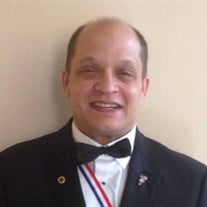 Stephen Joseph Richichi, Ph. D. passed away on July 26 th , 2020 after a sudden heart attack. Tragically, his passing came two days after the loss of his sister, Joanne Kyung-Soo Richichi, to whom he was a devoted and loving brother. Stephen was born on January 2 nd , 1963 in Topeka, Kansas, while his father was an officer in the US Air Force. The family moved numerous times during those years to places such as Little Rock, Arkansas; Salina, Kansas; and Nashville, Tennessee. In 1969 the family moved to Brentwood, New York, and was with Steve's paternal grandparents, aunts, and uncles. The extended family spent lots of time together at their frequent gatherings. They then moved to Oklahoma in 1978, where they lived for two years until moving to Hamilton, Virginia. It was there that Steve finished high school, and then attended Virginia Tech, where he earned a Bachelor of Science degree in Physics in 1987. After a few years of working as a manager in the fast food industry, he moved back to Oklahoma where his oldest brother and parents had resettled, and went to graduate school at the University of Oklahoma, where he earned his Ph.D. in Physics in 2000, spending several years at Cornell University doing high-energy physics research. He worked as a visiting and adjunct professor for several years, and in 2003 was diagnosed with stage 4 Hodgkin's lymphoma. After several intense rounds of chemotherapy for nearly a year he was declared cancer-free. After that he moved back to Oklahoma to be with his family and worked for many years as an adjunct instructor at many colleges and universities in the Oklahoma City metro area. He also was an important part of his nephews' and nieces' lives, especially his brother Paul's children who lived in Oklahoma with him. He was a math and physics tutor as well, including to his own family. In the last few years of his life, he sacrificed his academic career to become a full-time caregiver for his father. He also helped manage his dear sister's care. In this time, he was very active at St. Joseph's Catholic Church in Norman, participating in the church choir and helping cook Thanksgiving dinners and other meals for church events. Additionally, he was serving as Grand Knight at the church's Knights of Columbus Council 21819. His deep faith was an important part of his life. He is predeceased by his mother, Rosemarie, and his sister, Joanne. He is survived by his father, Geatano; his brothers, Paul (Catherine) and Michael (Sherryl McBride); and his many nieces and nephews. A joint Memorial Service to honor Stephen and his sister Joanne will be at St Joseph's Catholic Church in Norman, OK at 10:30am on Wednesday, August 5 th . The service will be live streamed on the Facebook page of the church, https://facebook.com/stjoes. In lieu of flowers, a collection is being made for funeral expenses and a donation in the family's name to The Center of Family Love, more information at ��.

Stephen Joseph Richichi, Ph. D. passed away on July 26 th , 2020 after a sudden heart attack. Tragically, his passing came two days after the loss of his sister, Joanne Kyung-Soo Richichi, to whom he was a devoted and loving brother. Stephen... View Obituary & Service Information

The family of Stephen Joseph Richichi created this Life Tributes page to make it easy to share your memories.