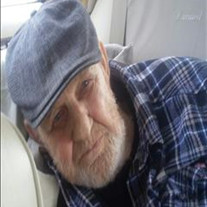 Stanley Gale Petrey was born on August 29, 1943 in Goldwaite, Texas to Henry Franklin and Lessie Mae (Conway) Petrey. He passed away on January 5, 2019. He worked in the oilfields of West Texas all of his young life. His work brought him to... View Obituary & Service Information

The family of Stanley Petrey created this Life Tributes page to make it easy to share your memories.