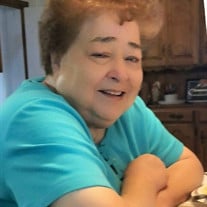 Shirley Ann Vickery, age 79, passed away on her birthday at her home in Hobart, Oklahoma on November 19th, 2021. Ann was the second of six children born to Clyde and Aline Hooker of Leon, Oklahoma on November 19th, 1942 where she was raised on a farm. Ann was a beloved mother, grandmother, sister and a great friend to many people. She was a devoted Christian and a member of the Hobart Church of Christ. She was also a member of the Choctaw Nation. A few short years later after graduating high school, she was employed in Ardmore, Oklahoma. This is where she met the love of her life, Arlen Vickery. They were married on May, 11th, 1966 at the Washita County Courthouse in Cordell where they were united together for 52 years. After moving around to several towns in Oklahoma due to Arlen's construction job in helping build the interstates, they eventually made their home in Gotebo for several years where she did the bookkeeping duties for their dirt service company, steam cleaning service, and trucking company businesses. When Arlen became the Assistant Fire Chief and later as the Fire Chief for the Gotebo Volunteer Fire Department, she would assist him by making phone calls using a rotary dial phone to the Gotebo firefighters and dispatch them on reported fires. Keep in mind that this was in the days before computers, cell phones, and 911 were ever around. Later on she went to work at CR Industries and retired from SKF in Hobart. After retirement, Ann and Arlen moved to Hobart to enjoy their golden years together. Ann was a wonderful cook and always glad to help with the meals for the church and funerals. She enjoyed sharing her beautiful hand written recipes to her granddaughter Lori. She loved working in her yard and had one of the most beautiful backyards that looked like paradise. Most of all, she loved her grandchildren and took great pleasure in making sure that they had warm home cooked meals. Other things she enjoyed, was reading the Bible, doing biblical-word-finds, watching the Hallmark Channel and having long conversations on the phone with her family and friends. Ann is survived by her son and wife, Ron and Stephanie Vickery of Lawton; a grandson, Austin Vickery of Fort Smith, Arkansas; and a granddaughter, Lori Martinez of Lawton. She is also survived by a brother and wife, David and Linda Hooker of Oklahoma City, Oklahoma; 2 sisters and husbands, Linda and Ron Mitchell of Mustang, Oklahoma; and Jacque and Tim Terrill of Scottsdale, Arizona; also a sister-in-law and husband Kay and Buck Owens of Henniker, New Hampshire; along with a host of several nephews, nieces and other family members. She is preceded in death by her husband Arlen Vickery; an infant daughter; a grandson, Cameron Vickery; two brothers, Albert Hooker and Billy Wayne Hooker; and her parents, Clyde and Aline Hooker. Behind a good man there is a great woman and Ann was the strong foundation that held the family together, especially during the holidays. She will be dearly missed by both her family and friends.

The family of Shirley Ann Vickery created this Life Tributes page to make it easy to share your memories.

Shirley Ann Vickery, age 79, passed away on her birthday at her...