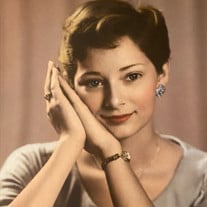 Sherlyn Kay Terry, born in Carnegie, OK on July 8, 1940 to parents, John and Helen Tracy. She was raised in Mountain View, Oklahoma and graduated from Mountain View Highschool in 1958. She attended Oklahoma State University and Southwestern Oklahoma State University until she married Donald Ray Terry on July 20, 1960 in Mountain View. Sherlyn worked in the field of medical insurance for BlueCross BlueShield in Dallas, Texas early in her career and later returned to Mountain View with her husband, Don, to raise their family. She managed the books and insurance for the hometown doctor, Doc Tolbert for 16 years. She also owned and operated Terry's Grill serving up delicious fried onion burgers. She served on the Mountain View school board for many years and was an active supporter in the beautification efforts in Mountain View. Making memories was everything to Sherlyn and the value of a Colorado vacation with family and friends was always a top priority. She loved to fish and deal in antiques with her dear friend, Terry and she loved to garden and cook with her dear friends, Bruce, and Sharon. Her grandkids believed she could fix any problem with her banana pudding as well as a bushel and a peck and a hug around the neck. Sherlyn is survived by: Husband, Donald Ray Terry of the home. Daughters, Tracy Fairless and Anthony Gelvin of Edmond and Julie and Randy Hendrix of Yukon. Seven grandchildren include; Ashton John Fowler and wife Haley of Norman, Brianna Fairless and Josh Philips of Edmond, Kaylee Fairless and Noah Johnston of Edmond, Blake Hendrix, of Tennessee, Savannah Hendrix of Edmond, and Grant Hendrix of Yukon. She has one brother, John Tracy II and wife Mickey of Mountain View and four nephews, John Tracy and wife Natalie of Edmond, Jay Tracy of Oklahoma City, Ronnie and Angela Fleming of Weatherford, Oklahoma and Rusty and Regina Fleming of Temecula, California. She was preceded in death by father, John Tracy and mother Helen Tracy. Services will be held in the chapel at Ray & Martha's Funeral Home in Carnegie, Oklahoma on Saturday, January 22, 2022 at 11:00 a.m. In lieu of flowers, donations to honor Sherlyn's battle with both breast and lung cancer, donations can be made to the Tenaciously Teal organization. Under the direction of Ray & Martha's Funeral Home

Sherlyn Kay Terry, born in Carnegie, OK on July 8, 1940 to parents, John and Helen Tracy. She was raised in Mountain View, Oklahoma and graduated from Mountain View Highschool in 1958. She attended Oklahoma State University and Southwestern... View Obituary & Service Information

The family of Sherlyn Kay Terry created this Life Tributes page to make it easy to share your memories.