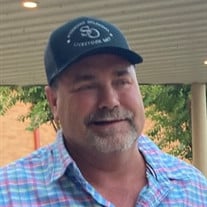 Scotty Sells, 57, of Carnegie, Oklahoma passed away unexpectedly on January 6th, 2022 at the Carnegie Tri-County Hospital in Carnegie, Oklahoma. He was born on January 5th, 1965 to Billy and Jean Sells in Fort Cobb, Oklahoma. Scotty grew up and attended school in Carnegie and graduated from Carnegie High School in 1983. He met the love of his life Kristie Hayes, they were united in marriage on June 1, 1990 in Wichita Falls, Texas, to this union were born one daughter Bailee. Scotty worked at Fleetpride in Weatherford, Oklahoma where he had many friends. In his spare time he enjoyed watching YouTube on his iPad, and scrolling through parlor and listening to some of his favorite music "on his big bad speaker". Scotty spent a lot of time collecting guns and ammo, it was one of his passions. He will be deeply missed by all who knew and loved him. Survivors include his wife: Kristie Sells of the home in Carnegie, OK Daughters: Bailee Sells, Carnegie, OK Jenifer Brown & husband Casey, Lawton, OK Mother: Jean Sells, Corn, OK Mother & Father in-law: Gerald Hayes & wife Sue, Walters, OK Sister: Lena Bradley, Carnegie, OK Brother: Paul Sells & wife Becky, McAlester, OK, Brother and Sister-In-Law: Scottie and Yolanda Hayes, Walters, OK Grandchildren: Macin, Peyton, Landry, and Sutton Brown, Lawton, OK Under the direction of Ray and Martha's Funeral Home, Carnegie, OK

The family of Billy Scott Sells created this Life Tributes page to make it easy to share your memories.