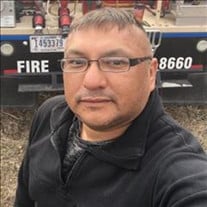 Scotty Ray Kopepassah was born in Carnegie, OK on December 29, 1976, to Jackie BigBow and Dennis Kopepassah. He spent his childhood in Mountain View and Carnegie. Scott's early years were spent in Mountain View with his Grandma Nona Quoetone, Aunt Bertha, and numerous uncles. Scotty later moved to Carnegie, OK where his parents built a home next to his grandparents Harding and Pearl BigBow. He was very close to them visiting them daily and making a path between the two houses, by cartwheeling back and forth. He enjoyed spending time with his cousins Angela Lamebull and John Lamebull. They were the three musketeers, doing everything together and always remained close sharing special times together. Scott was happy and blessed to become a big brother to Tyler Kopepassah and Angela BigBow-Ball. He loved them both with all his heart and supported them in every way possible. Scott was there for all their important events in their lives, from graduation to their weddings. Upon completing high school Scott found a career that gave him purpose. He became a Wildland firefighter. This allowed him to meet different people from various Tribes across the country. Scott would speak of this firefighting family (his brothers) with love and admiration. Scott was a proud member of the Kiowa Tribe. He represented them in all he did with forestry. During his career as a firefighter Scott was blessed with two boys, Eric Kopepassah and Clifford Kopepassah. He was so proud to be their father. Scott spent as much time as he could with them and loved them unconditionally. They were his inspiration when he fought fires to return home safely. Scott met the love of his life, Lillian Baker. They were united in marriage on September 22, 2018. They created a family together. Lilly had three boys and daughter, joining Scott's two boys. Blending of the two families into one made Scott's life complete. He was a loving and devoted husband. Scott took his family on trips to the park and the mountains. He also loved going out to eat together. Scott loved nature and its beauty. Even when he was not fighting fires, he would choose to go to the Wichita mountains and enjoy time outdoors with his family. When Scott was home, he would attend family dinners at his moms with his siblings in Carnegie. Scott's family was one thing he valued the most. From work to his everyday life Scott valued the precious relationships he formed. He is proceeded in death by his: Grandparents, Harding and Pearl BigBow; Grandmother Nona Quoetone; Aunt Dolores BigBow; Uncles: Elton Quoetone, Lelbert Kopepassah Jr., Teddy BigBow and Eddie BigBow. He is survived by his: Wife: Lillian Kopepassah of the home Sons: Isaac Lookingglass, Lawton, OK Peter Rodridguez, Lawton, OK Joel Lookinglass, Lawton, OK Eric Kopepassah, OKC, OK Clifford Kopepassah, OKC, OK Daughter: Seline Lookinglass, Lawton, OK Mother: Jackie BigBow, Carnegie, OK Father: Dennis Kopepassah. Carnegie, Ok Brother Tyler Kopepassah and wife Claire, Carnegie, OK Sister Angela Ball and husband, Nick and Niece Amelia. Lawton, OK Adoptive sister: Debra O'mally, Lawton, OK Special Aunt Bertha and Uncle Marland, Lawton, OK Aunts: Harvetta BigBow and Rhodene BigBow Numerous cousins, nieces, nephews and other relatives. Funeral Services: 10:00a.m., Friday, September 10, 2021 Carnegie Memorial Building, Carnegie, Oklahoma Interment: Samone Cemetery, Carnegie, Oklahoma Visitation: 11:00a.m. - 8:00p.m., Thursday, September 9, 2021 Ray and Martha's Funeral Home, Carnegie, OK Under the direction of Ray and Martha's Funeral Home, Carnegie, OK.

Scotty Ray Kopepassah was born in Carnegie, OK on December 29, 1976, to Jackie BigBow and Dennis Kopepassah. He spent his childhood in Mountain View and Carnegie. Scott's early years were spent in Mountain View with his Grandma Nona Quoetone,... View Obituary & Service Information

The family of Scotty Ray Kopepassah created this Life Tributes page to make it easy to share your memories.

Scotty Ray Kopepassah was born in Carnegie, OK on December 29,...