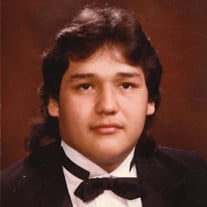 Rudolph Silas Starr, 51, of Oklahoma City, OK went to his heavenly home on Sunday, September 13, 2020 in Oklahoma City, OK. Graveside service will be 2:00 PM, Friday, September 18, 2020 at Saddle Mountain Cemetery with Pastor Mike Boyiddle and Rickey Horse officiating. Rudolph was born in Lawton to Rudolph and Deborah (Horse) Starr Sr on July 6, 1969 He attended school in Oklahoma City, OK and graduated from Riverside where he met Jackie. He was a member of the Kiowa Tribe of Oklahoma and was also of Apache and Ponca descent. He loved watching the OU Sooners and the Dallas Cowboys. He enjoyed playing for his father's softball team, "The Redbirds" and various other teams and then play with the Birds. Travelling and going to play in tournaments every-week-end. He loved coaching his son and nephews softball games. He was so proud to be a family man and a father figure to many people. He was so respected by many people and loved being the person everyone could count on and having a heart of gold who even helped people he didn't know. He and his wife would go to the casino on dates. His beloved family time would be eating with his family and spending time with his granddaughter giving her candy and then returning her to her mother. He loved going to pow wows with his family. He was the Chairman of Satethieday Khatgomebah (White Bear Descendants) organization. He is survived by: his companion of 33 years, Jackie Tenequer, OKC Son, Rudolph Starr III, OKC Daughter, Deanna Starr, OKC Granddaughter, Amiyah "Miymiy" Starr, OKC Mother, Deborah Starr, OKC Brother, Christopher Starr Sr. and wife Shanda Sisters, Mary Iacobucci and husband Rob; Andrea Starr and husband Chebon Mayfield Many nieces, nephews, extended family, grandchildren, great grandchildren, many friends that loved him greatly. Special Grandmother, Shirley Tanedooah He is preceded in death by his father, Rudolph Starr Sr. Paternal Grandparents, Edward "Dutch" Topaum & Mary Elizabeth Starr Maternal Grandparents, Richard and Nell "Rose Smith" Horse Uncles, Alfred "Sada" Topaum Martin "Thoonie" Topaum, Ricky Allen Topaum, Orel Lee Horse, Dewey E. Horse, Dennis Ray Horse, Aunt, Emma Winnie Chasenah.

The family of Rudolph Silas Starr, Jr created this Life Tributes page to make it easy to share your memories.