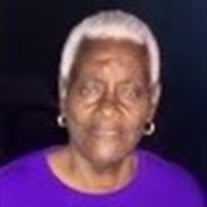 On Sunday, February 6, 2022, Rosie Boardingham, 83, of Anadarko, Oklahoma was called to her heavenly home. She was born April 23, 1938 in Newalla, Oklahoma to Albert and Beulah Boardingham. Rosie, who was known to some as "Queenie," attended school in Newalla and Anadarko. When she first moved to Anadarko, Rosie worked at a daycare center, and later worked at Hollytex Carpet Mills. She also worked as a dietary aide. Rosie loved to play cards, bingo, go watch movies, and she loved the NBA. She enjoyed the outdoors and loved spending time with her family, friends, and grandchildren. Ms. Boardingham had a strong faith in the Lord and she loved gospel music. Since November of 2021, Rosie had been a resident at Shanoan Springs Residence Nursing Center in Chickasha, Oklahoma. Rosie will be welcomed into heaven by her: parents, one sister, one brother, one son, four nephews, one niece, and one daughter-in-law. Survivors include: Four sons: Coran "Corky" Boardingham and his wife, Sheila, of Copperas Cove, Texas, and Elliott "Doc" Ellis, Rufus "Tootie" Boardingham and his spouse, Shawn Miller-Williams, and Dan Boardingham and his spouse, Christi Sheridan, all of Anadarko One daughter: Rosetta Ellis of Chickasha Three sisters: Mary Boardingham of Anadarko, Hazel Burton of El Paso, Texas, and Alfreta Gill of Oklahoma City, Oklahoma Two brothers: Garfield Doakes of Edmond, Oklahoma and Major Boardingham of Anadarko Many grandchildren and great-grandchildren A host of nieces, nephews, cousins, and other relatives, and Natalie Bankston of Anadarko, who Rosie considered a second daughter. Visitation: 9:00 am - 8:00 pm, Wednesday, February 9, 2022 Ray and Martha's Funeral Home, Anadarko, OK Graveside: 2:00 pm, Thursday, February 10, 2022 Memory Lane Cemetery, Anadarko, OK Pastor Ted Mercer officiating Under the direction of Ray and Martha's Funeral Home, Anadarko, OK

On Sunday, February 6, 2022, Rosie Boardingham, 83, of Anadarko, Oklahoma was called to her heavenly home. She was born April 23, 1938 in Newalla, Oklahoma to Albert and Beulah Boardingham. Rosie, who was known to some as "Queenie," attended... View Obituary & Service Information

The family of Rosie Boardingham created this Life Tributes page to make it easy to share your memories.