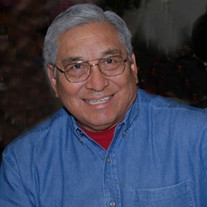 Dawes, 76, was born at Lawton Indian Hospital in Lawton, Oklahoma on January 8, 1944 to James Daugomah and Agnes Twohatchet Horse. Dawes was raised by his big sister, or great aunt, Belle Tsatsatine and Johnny Allison in Carnegie, Oklahoma. Dawes also answered to the name Clayton to those who knew him from this time. Dawes attended Carnegie Public Schools graduating with the Class of 1962. He attended Haskell Institute in Lawrence, Kansas and Southwestern State University in Weatherford, Oklahoma lettering in football at both schools. He scored the very first touchdown for Haskell football. Dawes married Delores Quoetone on August 20, 1966 at Mt. Scott Kiowa Church. They moved to Albuquerque, New Mexico, where he worked as an accounting clerk at the B.I.A. Office of Consolidated Services. He and Delores attended Southeastern State University on a Parsons scholarship. During this time, Dawes worked at Durant High School teaching accounting, business, and typewriting classes as well as, carrying the role of assistant football and track coach. He received his Bachelor of Science in Business Education and Master of Education from Southeastern in 1970. Dawes and Delores had their first child, Ronald Deron Twohatchet on March 3, 1970. After receiving their graduate degrees, the Twohatchets moved to Lawrence, Kansas teaching at Haskell Jr. College. Dawes coached football at Haskell, as well. In 1974, he was offered a job with Lawton Public Schools where he taught accounting and typewriting classes at Eisenhower Senior High School. He also worked as an assistant football coach and girls' basketball and track coach. In 1976, Dawes and Tom Crimmons started the girls' basketball program at Eisenhower High School. In 1978, Dawes moved from teaching to education administration at the Lawton Board of Education as Assistant Director of Federal Programs where he worked until 1983. During this time, the Twohatchet family welcomed two more children, Deandrea Robin Twohatchet in 1978, and Ryan Duane Twohatchet in 1981. Dawes was promoted to Director of Federal Programs starting in 1983 and up until 1988. From 1988 to 1990, Dawes was the LPS Director of Physical Facilities. Dawes earned his principal and superintendent's certification at the University of Oklahoma before returning to teaching at MacArthur Senior High School. In addition to teaching accounting, business math, computer applications, government, and world history he served as yearbook sponsor, African American Club Sponsor, and coached girls' soccer making it to the State Tournament all his coaching years. During this time, he also officiated football and basketball games for the Oklahoma Secondary School Athletic Association. In 1999, Dawes was honored as the Outstanding Alumnus at Haskell Indian Nations University. In 2004, he was inducted into the Southwest Oklahoma Football Officials Association Hall of Fame. Dawes retired from Lawton Public Schools in 2007. He served as a Trustee on the Kiowa Casino Operations Authority which was instrumental in the opening of the Kiowa Casino in Devol, Oklahoma. He was elected as Kiowa Tribal Chairman in 2010 and sworn in at the Kiowa Tribal Complex in 2010. After completion of his term, he served as Director of Housing with the Apache Tribe in Anadarko, Oklahoma. During his career in education and athletics, he served on numerous state and federal education advisory committees, taught basic adult education in the Kiowa and Comanche tribal education programs, was a member at the Goodwill Industries Board of Directors, the Great Plains Improvement Foundation Board, and the Marie Detty Youth and Family Services Board of Directors. He was a member and trustee for the United Methodist Church of Apache. Dawes understood and spoke the Kiowa language. He served as emcee at many area powwows. He emceed at the Kiowa Gourd Clan benefits and July celebration, and the Kiowa Blackleggings Society Dance. He was a highly requested and sought-after Kiowa hymn singer. Dawes Twohatchet is survived by his beloved wife of 54 years, Delores Twohatchet of the home; two sons, Deron Twohatchet of Lawton, Oklahoma, Ryan Twohatchet and his wife, Valerie of Lawton, Oklahoma; one daughter, Robin Hughes and her husband, Shaun of Lawton, Oklahoma; two brothers, Billy Horse and his wife, Paula of Carnegie, Oklahoma, Perry Horse and Eva of Albuquerque, New Mexico; three grandsons, Landon Choney and Shaun Hughes Jr. of Lawton, Oklahoma, Nathan Choney of Norman, Oklahoma; six granddaughters, Victoria Bermudez and her husband, Brandon, Claudia Choney, Olivia Choney, Mia Hughes all of Lawton, Oklahoma, Makaylee Twohatchet of Albuquerque, New Mexico, Jordann Singer of Page, Arizona; a little brother/great-grandson, Adrian Choney-Bermudez; a little sister on the way, Sofia Bermudez; special companion/tsaygun, Ga-Thai. Dawes is preceded in death by parents James Daugomah and Agnes Twohatchet Horse; brothers, Donald Horse, James Horse Jr., Curtis Horse, Jimmy Horse, Larry Horse, James Daugomah, Art Daugomah, Melvin Geionety, Calvin Saumpty; sisters, Elaine Nimsey, Leona Mae Horse, Juanita Ahtone, Mamie Bohay, Vena Beaver, Lou Walker, Ida Landin, Charlotte Ann Daugomah. Visitation is Tuesday, December 15, 2020 from 1:00pm to 8:00pm and Wednesday, December 16, 2020 from 9:00am to 8:00pm at Ray and Martha's Funeral Home in Carnegie, Oklahoma. Graveside services for Ronald Duane "Dawes" Twohatchet will be at 1:00pm on Thursday, December 17, 2020 at Mt. Scott KCA Intertribal Cemetery on Oklahoma State Highway 58 in Meers, Oklahoma. Officiating will be Marilyn Bread assisted by Donnie Ahhaitty. The family asks that anyone in attendance wear a mask and practice social distancing. There will soon be a memorial page set up that can be found by searching Ronald Dawes Twohatchet on Facebook. Under the direction of Ray and Martha's Funeral Home in Carnegie, Oklahoma.

The family of Ronald "Dawes" Duane Twohatchet created this Life Tributes page to make it easy to share your memories.

Dawes, 76, was born at Lawton Indian Hospital in Lawton, Oklahoma...