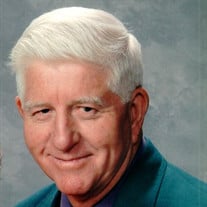 On March 11, 2022, Rev. Ronald Gene Thiessen left this world to be with his Savior, Jesus Christ. He had lived 80 glorious wonderful years here on earth. On November 14, 1941, Ronald was born to Roy and Flossie Thiessen in a small farmhouse in Oakdale, OK. He was born into a farm family where he learned to drive a tractor at 6, and woke early to milk cows before he would head off to school. His parents would take the milk to town to trade for things they couldn't raise themselves. As a teenager, he helped chopped cotton and helped with many other crops on the farm. He met his future wife, Ruth Williams at a CA Rally when they were 14. They fell in love and were married when he turned 18. They stayed side by side for 62 wonderful, adventurous years. They started their married life in Eakly, OK where he tried his hand at farming and working at the propane company. In 1960, He welcomed a firery little girl, Bonita, to his family. She was his little sidekick. In 1965, a cute little red headed boy, Nathan joined their family as well. In 1966, he was called by God to preach and took a small church in Carnegie, OK. He received his ordination in the Assembly of God organization in 1970. This lead him to pastoring small churches through out the Oklahoma Region. He worked odd jobs to help supplement his family's income. In 1973, he answered the hard call of God to go to Mount Sterling, KY to continue on with his ministry. After that, he was called to Elkton, KY. In the fall of 1975, the returned to Oklahoma, settling down in Anadarko OK. He started Ron's Upholstery and bought an H & R Block Tax Service. As his children grew up, he started pastoring a small Assembly of God Church in Fort Cobb, OK. Then as he was being blessed with grandchildren, Ron and Ruth Thiessen were called to Sentinel, OK to pastor. Later, they were called to Hot Springs, AR to work in an children's home to help boys between 9 and 12. But the pull of the grandchildren, brought them back to Washita, OK, where Ron and Ruth made their final home. He reopened his Upholstery Shop. Ruth planted huge gardens. Together they made their own slice of paradise, canning the labor of the garden, helping with grandkids, raising a assortment of chickens, geese, ducks and rabbits. Together, Ron and Ruth enjoyed each others company thoroughly. During this time, they traveled throughout the U.S. as they had done when their children were younger. They went camping and enjoyed every state park they could. They even took their grandkids along for adventures to many different places. His children would tell the grandchildren about how they camped everywhere and many memories were made. Ron also went to Deer Camp every year with his brothers and their boys, rarely bringing home a deer, but always smokey clothes. He was a beloved man, who loved everyone he met. He worked hard and loved animals, mostly golden retrievers. He loved his kids and grandchildren fiercely. He is preceded in death by his: parents, Roy and Flossie Thiessen; stepmother, Ruby Thiessen; sister, Marsha Kaye; sisters in law, Susan Thiessen, Connie Thiessen, Pat Thiessen; great granddaughter, Amy Diane Sells; niece, Dana Snider Ronald is survived by his: wife, Juanita Ruthdea of the home Daughter: Bonita Jean Thiessen, Anadarko OK Son: Nathan Dewayne Thiessen, Anadarko, OK Six Grandchildren and their spouses: Justin & Michelle Thiessen, Edmond, OK; Jonathan & Lindsey Thiessen , Kingfisher OK; Katharina & Brandon Sells, Carnegie, OK; Jalantha & Michael Apfel, IN; Jackelyn Thiessen, Chickasha, OK Great Grandchildren: Alexender, Samantha, Peytn, McKenzie, Brayden, Malcus, Tyler, KateLynn, MaKayla, Kenneth, Coed, Austin, Macey, Kimberly, Kody, Katelynn, Joshua He also had one great great grandchild. Brothers: Troy Don & wife, Sonya Thiessen, Joplin, MO Roy Dean & wife, Linda Thiessen, Eakly, OK Larry Wayne & wife, Paula Thiessen, Eakly, OK Gary Lee Thiessen, Joplin, MO Sister: Donna & husband, Gale Pearcy, Eakly, OK Rev. Ronald Thiessen was beloved by a host of family and many friends. Funeral: 2:00 p.m., Thursday, March 17, 2022 First Assembly of God Church, Anadarko, OK Graveside: 3:30 p.m., Thursday, March 17, 2022 Fort Cobb Cemetery, Fort Cobb, OK Visitation: 9:00 a.m. - 8:00 p.m., Wednesday, March 16, 2022 Ray and Martha's Funeral Home, Anadarko, OK Under the direction of Ray & Martha's Funeral Home-Anadarko, OK

On March 11, 2022, Rev. Ronald Gene Thiessen left this world to be with his Savior, Jesus Christ. He had lived 80 glorious wonderful years here on earth. On November 14, 1941, Ronald was born to Roy and Flossie Thiessen in a small farmhouse... View Obituary & Service Information

The family of Rev. Ronald Gene Thiessen created this Life Tributes page to make it easy to share your memories.