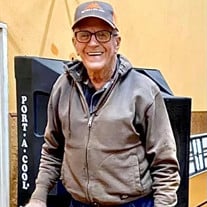 Ronald Lee Frank was called home to his lord and savior on October 14, 2021. Ronald Lee slipped into eternity surrounded by his beautiful wife and daughter. He was born on October 7,1936 in Gotebo, Oklahoma to Carl and Iantha (Pewthers) Frank. Ronald Lee grew up on the Frank family farm where he developed a diligent work ethic, entrepreneur spirit and craftsman skill set. On May 3,1958 he married the love of his life Mary (Marshall) Frank. The Lord blessed Ronald Lee and Mary with a son, Tommy Frank, on September 14, 1959. Ronald Lee owned and operated a filling station in Gotebo, Oklahoma. He then moved his family to Oklahoma City where he worked as a master carpenter in luxury houses. On his 29 th birthday on October 7 th ,1965 Ronald Lee and Mary were blessed with their daughter, Cara Lee. After a few years in Oklahoma City, Ronald Lee moved his family closer to his hometown. Ronald Lee operated a second filling station in Cordell, Oklahoma. After moving on from the gas station business, he returned to his tradecraft as a master carpenter. He moved his family to Mountain View, Oklahoma in 1973 and purchased the Frank family farm from his parents. Ronald Lee continued to excel as an entrepreneur and made a living for his family by remolding houses around the Mountain View- Gotebo area. During this point in his life, Ronald Lee developed a skill set in masonry and added brick laying to his resume. He discovered Masonry jobs took less time to complete compared to full remodel jobs. Ronald Lee switched to masonry to provide more opportunity to work on the family farm. Around 1982, Ronald Lee pursued his dream of farming full time partnering with his son. Ronald Lee and his son Tommy grew the farm together by increasing productivity and purchasing neighboring farmland. Ronald Lee had owned the Frank family Farm for the past 48 years. Ronald Lee was a devout man of faith and a member of the Mountain View First Baptist church since 1973. During his life, Ronald Lee was able to use his craftsman skill set of carpentry and masonry to further the kingdom of God. He participated on missionary trips from Mexico to Portland, Oregon. Ronald Lee built the east wing and the church gym of the Mountain View FBC. He gave his time and service to bettering the church property, including building the church steeple and adding the west awning in the summer of 2020. A true jokester, Ronald Lee was the first to crack a joke and the first to make others laugh. Ronald Lee had a smile that would fill a room and truly knew no strangers. He made everyone feel welcomed with his warm embrace. Ronald Lee is survived by his wife of 63 years, Mary Frank. His son Tommy and wife Lisa Frank, of Mountain View, OK. His daughter Cara Lee Frank, of Mountain View, OK. His grandchildren: Kristen Decker and husband Jay, of Meno, Ok, Kallen Frank and wife Shelshie, of Mountain View, OK, Ciera Knapp and husband Mark, of Noble, OK, and Corin Miller, of Oklahoma City, OK. His great-grandchildren: Kyeler and Acklee Frank, Cameron and Delilah Decker, and Reagan Lee Knapp. His brothers: Ernest Frank and wife Jimmie Zoe, of Mountain View, OK and Roger Frank and wife Donna, of Sentinel, OK. He is preceded in death by his parents, Carl and Iantha Frank, his brother Carl Elmer Frank, and sister-in-law Faye Frank. Funeral Service: 2:30 p.m., Monday, October 18, 2021 First Baptist Church Mountain View, OK Visitation: 2:00p.m.-6:00p.m., Saturday, October 16th, 2021 2:00p.m.-6:00p.m., Sunday, October 17, 2021 Ray & Martha's Funeral Home Chapel- Mountain View, OK Interment: Mountain View Cemetery

Ronald Lee Frank was called home to his lord and savior on October 14, 2021. Ronald Lee slipped into eternity surrounded by his beautiful wife and daughter. He was born on October 7,1936 in Gotebo, Oklahoma to Carl and Iantha (Pewthers) Frank.... View Obituary & Service Information

The family of Ronald Lee Frank created this Life Tributes page to make it easy to share your memories.

Ronald Lee Frank was called home to his lord and savior on October...