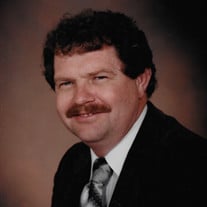 Robert L. Goettsch, 69, of Cordell, Oklahoma passed away peacefully with his family by his side on February 22nd, 2020 in Midwest City, Oklahoma. He was born on August 9th, 1950 to Julius Theodore (JT) and Ruth Armelda (Fox) Goettsch in Amarillo, Texas. Robert was a very hard worker and helped his parents on the family farm while growing up. He attended and graduated from Canyon High School in 1969. After high school, he attended college and received his Bachelor Degree in Agriculture Business from West Texas State University. Robert married Billie Helene Hill on June 11, 1976 in Amarillo, Texas at Beautiful Savior Lutheran Church. They moved to Western Oklahoma in 1977 for Robert to pursue his career as a fertilizer salesman. During this time, they began a family and had three children: Elissa Helene, Shawn Robert and Erik Paul. Robert truly had a servant's heart and devoted much of his time to helping others. He was a member of Peace Lutheran Church and served in several capacities. He enjoyed his time as a local business owner where he continued his sales career with cars and office supplies. Robert was very involved with the Cordell community for many years. He served on the city council, assisted with the Chamber of Commerce, and Rotary Club. Continuing with his willingness to help others, Robert served on soccer boards and became a coach and referee. He was also a Selective Service member and served the Western Oklahoma area for many years. He finished his sales career as a call manager with AT&T. Robert loved his family greatly. He found great joy watching and coaching soccer and attending his children's and grandchildren's school and sporting events. He will be deeply missed by all who knew and loved him; especially his wife, children and grandchildren. Survivors include his wife, Billie of the home Children: Elissa Cox & husband Brian of Madill, OK Shawn Goettsch of Tulsa, OK Erik Goettsch of Yukon, OK Grandchildren: Kaleb Cox, Hudson Cox, Kadeen Goettsch and Conner Goettsch Cousins: John Fox and Robert Fox Many other cousins, family members and friends He was preceded in death by his parents and grandparents Funeral: 1:00 p.m., Wednesday, February 26, 2020 Peace Lutheran Church Bessie, Oklahoma Interment: 11:00 a.m., Thursday, February 27, 2020 Dreamland Cemetery Canyon, TX Visitation: 1:00 p.m.~ 8:00 p.m., Monday, February 24, 2020 9:00 a.m. ~ 8:00 p.m., Tuesday, February 25, 2020 Family welcoming guest from 5:00 p.m. ~ 7:00 p.m. Ray & Martha's Funeral Home Cordell, Oklahoma In lieu of flowers, the family requests donations be made to Peace Lutheran Church, Cordell Soccer Club, or a charity of choice.

Robert L. Goettsch, 69, of Cordell, Oklahoma passed away peacefully with his family by his side on February 22nd, 2020 in Midwest City, Oklahoma. He was born on August 9th, 1950 to Julius Theodore (JT) and Ruth Armelda (Fox) Goettsch in Amarillo,... View Obituary & Service Information

The family of Robert L Goettsch created this Life Tributes page to make it easy to share your memories.