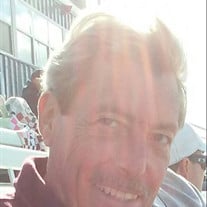 Robert (Bob) Louis Davis Services for Robert (Bob) Louis Davis will be held at Highland Methodist Church, 24005 N 2540 County Rd, Albert, OK on Saturday May 4th at 10:00 am. Bob was born January 20, 1952 to Carl and Blanche (Gover) Davis in Portales, NM. He was raised in Fredrick and Cordell OK and graduated from Cordell High School in 1970. He started working at a young age on the family farm and at their Mobil Service Station in Fredrick. After High School His Father-in-law, the Chief of Police, put him to work as a dispatcher for Cordell Police Department - Knowing where the cops were patrolling may or may not have been beneficial some of Bob's friends. It only took one day of work on a turkey farm in Clinton, OK to deter Bob from eating turkey for the rest of his life. He was a Private Investigator, Security Guard, and a sales man for Robertson's and DMI. In 2010 he and his wife Donell purchased and operated Sunset Cove Marina on Fort Cobb Lake. They sold the Marina in 2018 and Bob retired. Bob loved anything with a motor. The faster and louder, the better. This passion started as a young boy racing go-carts and graduated to racing cars on a dirt track. He passed His love of cars and racing on to his sons. He loved spending time with friends and reminiscing He learned to SCUBA dive with his friend Perk and they had some stories. Being at the lake, sitting by a fire, at the Marina or at home, all with friends and family and a cold beer. His greatest love was for his family. Equally, totally, and completely. Robert L. Davis passed away Sunday, April 28, 2019, at Yukon Integris Hospital. Robert is preceded in death by his parents Carl and Blanche Davis. He is survived by his wife Donell Davis of Fort Cobb, OK and 4 ex-wives. Son Chris Shields and wife Dena of Cordell, Daughter Dawn Davis also of Cordell, Son Russell Davis and wife Jamae of Rocky and Son Adrien Kosler and wife Morgan of Fort Cobb. Grandchildren Kira Jones, Jamie Phipps, Britton Shields, Katelynn Cusic, Kamdyn and Kyndal Davis, Jordan Cozad and Austin Jones and Great Grandchildren Baylor, Emma and Kyler Bob is also survived by his brother Kenneth Davis and wife Janie of Kingfisher and Sister Jean Hibbs and husband Glen of Blanchard and many nieces and nephews.

The family of Robert Louis Davis created this Life Tributes page to make it easy to share your memories.