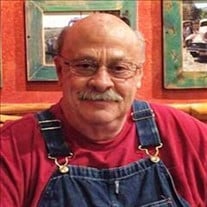 Robert Lee Cooper, 72, of Sentinel, Oklahoma passed away on Thursday, February 18, 2021 in Oklahoma City, OK. He was born on January 6, 1949 in Sentinel, Oklahoma to Robert W. and Dorothy Lee (Jenkins) Cooper. Bobby grew up and attended school in Sentinel and was drafted into the United States Army in 1967 during the Vietnam War. He served until April of 1970 before returning home. Bobby married the love of his life, Barbara George on May 6, 1971 in Memphis, Texas and they made their home in Sentinel. They would have celebrated 50 years of marriage in May. Their story began when Barbara saw him in his brothers gold Mustang convertible and she knew that he was the guy for her. Three beautiful girls were born to this union, April, Shyla and Dacia and they were all "Daddy's Girls". Bobby was all about family, his family, his children and grandchildren. He jumped anytime he heard the words "Poncho" or "Papa". Bobby enjoyed helping his girls and his grandsons Stone and Blade with their show pigs and watching the boys play baseball. Bobby enjoyed the last three years babysitting Easton. He loved us all well and we loved him and we will miss him dearly. Bobby (Cannon) spent most of his time in a truck hauling cattle, rock and wheat. Over the years he drove a truck for Garland Black, Jennings Trucking, Gotebo Express, Odie Hopkins, Jimmie Musick and others. He also owned two trucks of his own. He loved his cattle hauling days and was often heard saying "ain't no feelin like cow mobilin!" He was a member of the First Baptist Church and the American Legion in Sentinel. Bobby was proud to have served his country. He was preceded in death by his Daughter, Shyla Cooper, Parents, Robert W. and Dorothy Lee Cooper, Brother, Jerry Cooper and Nephew, Dalton Fry. Survivors Include his wife Barbara of the home 2 Daughters: April Cooper, Sentinel, OK Dacia Binghom and husband Bryne, Sentinel, OK 3 Grandchildren: Stone Baldonado, Blade Baldonado and Easton Binghom, all of Sentinel OK. 1 Brother: Mack Cooper, Sentinel, OK 1 Sister: Kenna Black, Billings, OK Mother in law: Shirley George, Sentinel, OK Bobby will be missed by several cherished relatives and friends. Funeral Service: 2:00p.m., Monday, February 22, 2021 First Baptist Church, Sentinel, OK Under the direction of Ray & Martha's Funeral Home, Sentinel, OK

The family of Robert Lee Cooper created this Life Tributes page to make it easy to share your memories.

Robert Lee Cooper, 72, of Sentinel, Oklahoma passed away on Thursday,...