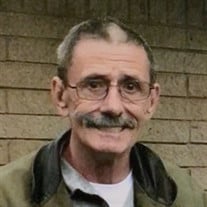 Robert Carey, Jr "Bob", also affectionately known as Papa and Grandpa Carey, died surrounded by his family on October 2, 2021, at the age of 67 at the VA Medical Center in Oklahoma City, OK. Bob was born on March 9, 1954, in Providence, Rhode Island to Robert and Joan Carey. He joined the Army immediately out of high school. The Army brought him to Oklahoma where he met and fell in love with Connie. They were married in August 1975. They welcomed three sons that, over the years, kept them busy with hunting, sports and everything in between. Bob was an avid fan of the New England Patriots, Boston Red Sox, Notre Dame and the Army � all very unusual since he was permanently planted in the great state of Oklahoma. You can't help but love his Rhode Island/Oklahoma accent. It was definitely one of a kind � just like him. Bob will always be remembered for making those around him laugh and smile. He was a generous, witty and dedicated man who loved his family, his early morning coffee dates with Connie, westerns, and working in his garden. He is preceded in death by his: father, Robert Carey, Sr; mother, Joan Carey; step-mother, Avis Carey; brother, Steven Carey; father and mother-in-law, George and Louise Butler Bob is survived by his: Connie Carey, wife of 46 years Sons: Bobby Carey (Gracie), Gulfport, Mississippi Travis Carey, Verden, Oklahoma Justin Carey (Christi), Washita, Oklahoma Grandchildren: Clayton, Maisie, Layton, Baylie, Maddie, Tanner, Dayton and Trayton Siblings: Tim Carey, Mary Carey and Kathy McGovern and their families, as well as all of his Oklahoma brothers, sisters and their families. Memorial Service: 11:00 am, Friday, October 8, 2021 Squaretop Baptist, Anadarko, OK Graveside: 12:00 pm, Friday, October 8, 2021 Fort Cobb Cemetery, Fort Cobb, OK Under the direction of Ray & Martha's Funeral Home, Anadarko, OK

Robert Carey, Jr "Bob", also affectionately known as Papa and Grandpa Carey, died surrounded by his family on October 2, 2021, at the age of 67 at the VA Medical Center in Oklahoma City, OK. Bob was born on March 9, 1954, in Providence, Rhode... View Obituary & Service Information

The family of Robert James Carey, Jr. created this Life Tributes page to make it easy to share your memories.