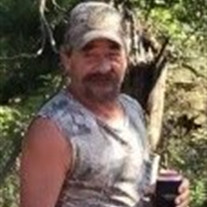 Richard Wayne Scott, 61, of Sentinel, Oklahoma passed away at home with his family by his side on December 9th, 2020. He was born on August 1st, 1959 to Claude and Selma (Derryberry) Scott in Russellville, Arkansas. Richard grew up and attended... View Obituary & Service Information

The family of Richard Wayne Scott created this Life Tributes page to make it easy to share your memories.

Richard Wayne Scott, 61, of Sentinel, Oklahoma passed away at...