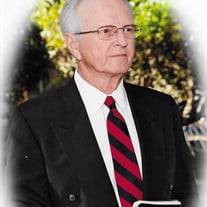 R.B. was born during the depression in 1935, and when his mom and dad took their first look at their new son, they became even more depressed. R.B. was the second son of Lawrence and Esther Mathis. Their first son, Lawrence Edward Mathis, gave his life while in the United States Marines in the defense of our country. R.B. is survived by his wife Pat Mathis of Cordell, OK; Chris Mathis and wife Kristin of Carrollton, TX; Mike Mathis and wife Tiphanie of Edmond, OK. He also has 7 Mathis grandchildren: Andrew, Rebecca, Timmi, Luke, Sarah, Rhyan, and Jake. As R.B.'s dad was a Nazarene minister, he moved every few years, and sometimes that would include moving to another state. In his early years he lived in Jacksonville, FL, Arcadia, FL, Manchester, GA, Parrish, AL, Sheffield, AL and Pensacola, FL. In 1951 R.B. moved to Oklahoma City to live with his aunt and uncle and to attend high school. R.B. graduated from Capitol Hill High School in Oklahoma City in 1953. During his high school years he worked at C.R. Anthony Company. In 1955 R.B. was united in marriage to Patsy Luper in the Capitol Hill Baptist Church in Oklahoma City. To this union two boys were born. In 1960, he left Anthony's after almost 10 years of service to enter the ministry. He worked at Wards in the Penn Square shopping center for almost 4 years while attending the University of Central Oklahoma in Edmond. In 1965 R.B. graduated from this institution with a Bachelor of Science degree in education. R.B. taught the 6th grade in Oklahoma City for five years while pastoring two small churches near Guthrie, Oklahoma. In 1970, he was called to be the pastor of the First Baptist Church in Piedmont where he remained until 1975. During this time he worked on, and earned a Master's degree in Guidance and Counseling. In 1975, R.B. and Pat and their two small boys, Chris and Mike, moved to Boise City, OK to become the pastor of the First Baptist Church where they remained until being called to the First Baptist Church in Cordell in 1987. In 2001 R.B. retired from full time ministry and he and Pat purchased a home in Cordell to be near the church family and friends. In 2002, R.B. was called to be the pastor of the Strong City Baptist Church in Strong city. In 2015, R.B. and Pat sold their home in Cordell and much of their furniture and moved into the Cordell Retirement Village. While in Cordell, R.B. not only was the pastor of the First Baptist Church, but he was active in the community affairs, serving on the boards of the Village, the Cordell Memorial Hospital and the Cordell Library. R.B. pestered, I mean pastored 6 churches. Each of these churches grew significantly under his leadership. Not very many pastors can make this next statement, but during R.B.'s leadership he pleased every member of those 6 congregations that he pastored, some when he came and some when he left. R.B. always said that he expected a large crowd at his funeral, people wanted to make sure he was gone. In lieu of flowers Donations may be made to Mission Dignity P.O. Box 819109 Dallas, TX 75381-9109. missiondignity.org Visitation: 3:00 p.m. ~ 8:00 p.m., Thursday, April 23, 2020 9:00 a.m. ~ 8:00 p.m., Friday, April 24, 2020 Ray & Martha's Funeral Home Cordell, Oklahoma Graveside Service: 11:00 a.m., Saturday, April 25, 2020 Resthaven Cemetery Oklahoma City, Oklahoma

R.B. was born during the depression in 1935, and when his mom and dad took their first look at their new son, they became even more depressed. R.B. was the second son of Lawrence and Esther Mathis. Their first son, Lawrence Edward Mathis, gave... View Obituary & Service Information

The family of Richard Bert "R.B." Mathis created this Life Tributes page to make it easy to share your memories.