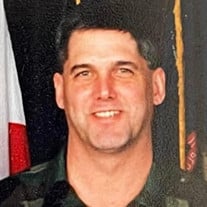 Richard Ray Laughlin of Enid OK, passed away on April 7th, 2022 at the age of 57 from a long battle with Leukemia. Rick was born on October 25th, 1964 in Lawton, OK. He was always known to be adventurous, witty and charming, just ask his older siblings. After high school, Rick enlisted in the Air Force and was stationed at Nellis Air Force base in Las Vegas, NV. Rick was blessed with two wonderful children and three grandchildren. They brought him so much joy and happiness. He lived for them. The accomplishments and awards he had were extensive but his children and grandchildren were his greatest prize. His spirit will live on through them. Rick was an avid Dallas Cowboys fan and loved attending games with his family. He loved rock music and bands like Pink Floyd, ZZ Top, A.C. D.C., and Guns N' Roses. Like most music lovers, Rick enjoyed attending concerts. Rick had a long and admirable career with the Air Force. He enlisted as a crew chief and with hard work and dedication he moved his way up to Master Sergeant. He loved to do maintenance on planes, especially the F15 Eagle and F22 Raptor. While in the service, Rick traveled the world. He was stationed in Virginia, Oklahoma, Iceland, Germany and England. And went TDY to Turkey, Iraq, Afghanistan, Iran, Saudi Arabia, and South Africa. Rick eventually retired from duty and worked as contracted civilian for Vance Air Force Base in Enid, OK. Despite being diagnosed with a very aggressive cancer, Rick never lost his charm or wit and continued to work and do what he loved until the very end. The way he died is just like he lived: he wrote his own rules, and paved his own way. If you told Rick he couldn't do something, he would make sure he would do it and say "I'm a Laughlin, I can do anything." Rick is predeceased by his Father, James Laughlin and his Mother, Donivee Cornelius. He is survived by his Children: Devene Laughlin, Christopher Laughlin and fianc� Santina Mayeski, Grandchildren: Hunter, Paige and Gavin. Siblings: John Laughlin and wife Sheila, Traci Williamson and husband Steve. Nieces and Nephews: Lisa Gregory and husband Jason, Janiece Rizzi and husband Michael, Tyler Williamson and fianc� Julia, Jordan Delp and husband Joel, Bailee Weems and husband Josh. Great Nieces and Nephews: Emma, Grace, Tugger, Karysn, Adalynn, Oaklynn, Revlynn, Rayce and Ruston. A memorial service will be held on Thursday, April 14th at 1pm at Lawnview Cemetery in Cordell, OK.

Richard Ray Laughlin of Enid OK, passed away on April 7th, 2022 at the age of 57 from a long battle with Leukemia. Rick was born on October 25th, 1964 in Lawton, OK. He was always known to be adventurous, witty and charming, just ask his older... View Obituary & Service Information

The family of Richard Ray Laughlin created this Life Tributes page to make it easy to share your memories.