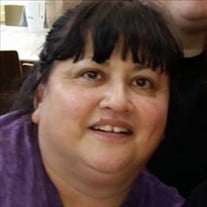 Regina "Kay" Jordan was born on December 8, 1961 in Carnegie, OK to Judith and Troy Bridwell. She passed away on November 13, 2021, surrounded by her loving husband, John and her 3 children with a native American blanket covering her. Kay was very proud of her Native American heritage. Even though Kay was only 59 years young, she lived a very meaningful and love filled life. After struggles during childhood she met the love of her life, John D. Jordan in 1979. She later married him on July 9, 1981. They then welcomed their first daughter Sandra in October of 1981, followed by the birth of their only son in October 1984, and their youngest daughter Krista in May 1990. Kay put all her heart into caring for her family at her home in Blanchard, OK. Her main job was a homemaker, however she also spent multiple years running a successful business with her husband. During this time, she also got her G.E.D. Kay's ultimate joy of her life was her grandkids. She was able to stay home and help care for them. She formed an unbreakable bond with all of them. She loved being a Mimi and as she would say, "Being a kid again with her grandkids". Kay was a person that would do anything for the ones she loved. Although Kay has gone from us physically, she will be in our hearts and memories forever. Kay is preceded in death by her: mother and father, Judith, and Troy Bridwell; sister, Sherri; and multiple aunts, uncles, and grandparents. She is survived by: John D. Jordan, husband of the home Children: Sandra Rowton and wife, Sarah, OKC, OK; John S. Jordan and wife, Christina, Newcastle, OK; Krista Jordan Long and husband, Jesse, Alex, OK Grandkids: Alysia, Delaney, John A., Kiowa, and Samuel Uncle: Jerry Stroud and wife, Rose, Wichita, KS Two sisters and aunts Celebration of Life: 11:00 am, Saturday, December 11, 2021 Portland Avenue Pentecostal Church 3636 SW 39th, OKC, OK Under the direction of Ray and Martha's Funeral Home, Anadarko, OK

Regina "Kay" Jordan was born on December 8, 1961 in Carnegie, OK to Judith and Troy Bridwell. She passed away on November 13, 2021, surrounded by her loving husband, John and her 3 children with a native American blanket covering her. Kay was... View Obituary & Service Information

The family of Regina Kay Jordan created this Life Tributes page to make it easy to share your memories.