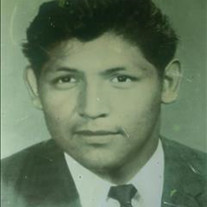 He was born July 3, 1947 in Lawton, Oklahoma to Herbert Redbone and Clara (Blackbear) Tselee. Raymond graduated from Chilocco Indian School and went on to continue his education at college. He was a part of a relocation program that took him... View Obituary & Service Information

The family of Raymond "Skillet" Tselee created this Life Tributes page to make it easy to share your memories.