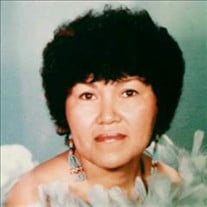 Rachel A. Unah (Tsotigh) passed away peacefully on Monday, August 16, 2021, in Alex, OK. She was born December 9, 1941, in Hobart, OK to Edward and Jennie Tsotigh. She was the middle child of 5 sisters and 2 brothers. She graduated cosmetology... View Obituary & Service Information

The family of Rachel Ann Unah created this Life Tributes page to make it easy to share your memories.

Rachel A. Unah (Tsotigh) passed away peacefully on Monday, August...