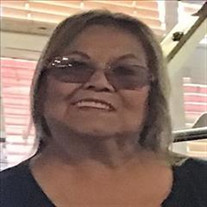 Phoebe Kodaseet, 74, was born at Lawton Indian Hospital on November 27, 1946 to Julia and James Toahty. She passed away on July 24, 2021 at her home in Geary, OK. After a car collision when she was four-years-old in Colony, OK Phoebe moved... View Obituary & Service Information

The family of Phoebe Emily Kodaseet created this Life Tributes page to make it easy to share your memories.

Phoebe Kodaseet, 74, was born at Lawton Indian Hospital on November...