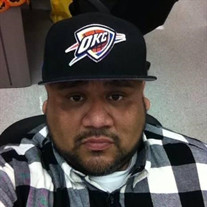 Phillip Howard Komalty Jr. best known as "Bear", "Bigg Bear", "El Oso", or "Sugar Bear" 43, was born to Phillip Komalty Sr. and Lori Lorentz in Tahlequah, Oklahoma on October 4, 1977. Bear passed on March 1, 2021, in Anadarko, Oklahoma. Bear grew up in the Anadarko area, graduating from Riverside Indian School in 1997. Bear attended college at Haskell Indian Nation University. Bear worked at the Chesapeake Arena and in the oilfield in Texas as a Roughneck. He leaves behind his parents of the home, his sisters, Cecelia Komalty and companion Tali Thompson, Starr and Delos Chavez, and brother David Komalty and Randi Yeahpau, all of Anadarko, Oklahoma. Bear is also survived by his loving nieces and nephews: Damon Drake Mooney, David Komalty Jr., Brody Roman Nose, Kade Komalty, Kyndee Thompson, Avery Jean Chavez, Raegan Thompson, Kamryn Chavez, Dakota Faith Chavez, Malachi Komalty, and Lyla Komalty; his maternal grandmothers Julian Whorton and Roberta Strange; special aunts Vickey Lorentz and Sheila Lorentz; his uncles Matthew Komalty Sr. and wife Margaret, Ernest Frank Komalty, and aunts Shirley Fawn Komalty, Karen Komalty Grey and husband Jerry, and Patti Hart. Bear is also leaving behind a special daughter Alizea; numerous cousins and lifelong friends. Of the numerous cousins, he grew up and had a special bond with Stacia King, Andrea King, Matthew Komalty Jr. "JR", Misti Bigbow, and Tommi Jean Komalty. Bear is preceded in death by his niece, Eva Rose Komalty, first cousins Lena Mae Lorentz and Zachary Lorentz. He is also preceded in death by his maternal grandparents, Arthur and Cecelia Lorentz, and paternal grandparents, Melvern and Peggy Komalty. He is also preceded in death by his uncles: Arthur Lorentz Jr. and Al Lorentz. Bear was a proud member of the Wichita and Affiliated Tribes and is also a descendant of the Kiowa Tribe of Oklahoma and the Comanche Nation. Bear was an avid San Francisco Giants and Oakland Raiders fan. He loved being an older brother and friend. He loved to terrorize both in person and on Facebook. Bear was known for his funny posts and crazy sense of humor. Bear was close to many people and no matter who he met, he made a lasting impression. Anybody that knew Bear, has a "Bear" story. He was a proud uncle and would have done anything in the world for his nieces and nephews. The outpouring of love by the community has been overwhelming and appreciated by the family. Bear touched many lives and this is evidenced by the many people who have reached out to the family. The pallbearers are Sylas Reeder, Steven Yeahpau, Delos Chavez, David Amado, Michael Owens, Marlon Robinson, Derrick Lorentz, Donovan Lorentz, Arthur Lorentz III, Logan Lorentz, Matthew Komalty Jr., and Chase Toyekoyah. The honorary pallbearers are his beloved nephews: Damon Drake Mooney, David Komalty Jr., Brody Roman Nose, Kade Komalty, and Malachi Arthur Komalty. A viewing will be held at Ray and Martha's Funeral Home in Anadarko, Oklahoma from 9:00 AM to 8:00 PM on Friday, March 5, 2021. Funeral services will be held at the First Baptist Church of Anadarko with Pastor Lynn Bellamy and Pastor Thomas Worcester officiating. Services are at 1:00 PM on Saturday, March 6, 2021, with live stream capabilities on Facebook. Graveside burial will be at Hog Creek Cemetery, following the funeral services. Bear will be laid to rest next to his beloved grandfather Melvern "Big boy" Komalty, with who he held a special relationship and who named him "Sugar Bear." There will be a meal after the services at the Iscani Gymnasium. Covid-19 restrictions will be followed.

The family of Phillip "Bear" Howard Komalty, Jr created this Life Tributes page to make it easy to share your memories.