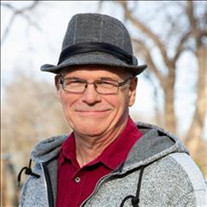 Phillip "Phil" Guy Hanson, 65, of Newcastle, OK, passed away peacefully on December 21, 2020 surrounded by his loving family. Phil was born on April 22, 1955 to Wayne and Lois Hanson in Bloomington, IN; the middle of three sons. After graduating from Bloomington High School South, Phil attended Indiana University and Indiana State University. At a New Year's meeting at the end of 1975, Phil met a beautiful Oklahoman named Gayle. Their love grew quickly and they were married in August of 1976. From then on, Phil always made his love for Gayle known to any and everyone he met. Together they have two sons, Mikel and Steve, and a daughter, Heather. Phil was a faithful member of the Whispering Pines Church of Christ in Tuttle, OK. In his daily life, Phil was a member of the Newcastle Senior Citizen Center long before he was technically a "senior". He loved spending time with his friends there playing dominoes and buying Gayle jewelry from their inhouse garage sales. Between home and the senior citizen center, Phil liked to spend his time recycling metal and sneaking food he knew he shouldn't eat. Phil is preceded in death by his parents, Wayne and Lois Hanson; a nephew, Brett Hanson; parents-in-law, Mike and Irene Hopkins; and brothers-in-law, Tom Everett and Dean Harris. He is survived by his wife of 44 years, Gayle Hanson (Hopkins) of Newcastle, OK; two sons, Mikel and Steve Hanson of Oklahoma City, OK, and one daughter, Heather Hanson of Norman, OK; two brothers, Gerald Hanson and wife Teresa of Bloomington, IN, and Ron Hanson and wife Joyce of Bloomington, IN; sisters-in-law Pat Everett of Sentinel, OK and Linda Harris of Tuttle, OK; as well as many nieces, nephews, and other family and friends. Phil will be laid to rest in Sentinel, OK at a private service. In lieu of flowers, please consider a donation to the Newcastle Senior Citizen Center, PO Box 86 Newcastle, OK 73065.

Phillip "Phil" Guy Hanson, 65, of Newcastle, OK, passed away peacefully on December 21, 2020 surrounded by his loving family. Phil was born on April 22, 1955 to Wayne and Lois Hanson in Bloomington, IN; the middle of three sons. After graduating... View Obituary & Service Information

The family of Phillip Guy Hanson created this Life Tributes page to make it easy to share your memories.