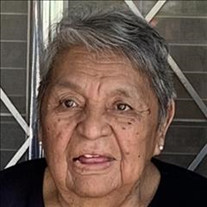 Penelope "Penny" Harriett (Toyekoyah-Komalty) Horse, 80, was born on February 17, 1940 to Matthew Komalty and Vena "Gertie" Ware in Lawton, Oklahoma. She passed away on Thursday, February 4, 2021 surrounded by her family, peacefully at her home in Midwest City, Oklahoma. Penelope, known affectionately as Penny, Aunt Penny, and Grandma, grew up in the Mountain View and Hog Creek, Oklahoma communities. She was a full-blooded enrolled member of the Kiowa Tribe. Her Kiowa name, Aday Hol Ah was lovingly given to her niece at the request of her brother as with the Kiowa tradition . In her younger years, Penelope excelled in athletics, especially softball. She was an excellent short stop for her beloved Hog Creek softball team. Later on, Penelope married Curtis Ray Horse on April 7, 1960. Together they had 3 children - Bruce, Carleton and Marisa. They began their married life in Okmulgee, Oklahoma before settling in Midwest City, Oklahoma. She was a devoted homemaker and spent her life raising and enjoying her children, grandchildren, and great-grandchildren. Penelope was a proud member of the Kiowa War Mothers, with her son serving in the United States Marine Corps. Penny was a devoted wife that supported her husband in fulfilling his duties for the Kiowa Gourd Clan and O-Ho-Mah Lodge, and supporting her daughter Marisa in her duties as Kiowa Princess and O-Ho-Mah Lodge Princess . She was an excellent seamstress, often traveling to surrounding states to craft shows. Her most precious projects were for her family. She enjoyed traveling, shopping, going to casinos, and spending time with her family. She is survived by one son, Bruce Horse and his spouse, Carol of Anadarko., Oklahoma; one daughter, Marisa Horse of the home; one grandson, Sean Horse and his spouse, Linda of Norman, Oklahoma; three granddaughters, Rachel Harley and her spouse, AJ of Midwest City, Oklahoma, Molly Fortner and her spouse, Jordan of Anadarko, Oklahoma, Codie Horse Topetchy of the home; seven great-grandchildren, Mason, Florence, Samuel, Penelope, Gabriel, Leo and Mabel; numerous special nieces and nephews who held her dear to their heart; Vena Aday Briones; Diego Romero; Bridgette; Carole; Cornel; Lyndrith Satepeahtaw; Randy Toyekoyah; Matt Komalty; special recognition of her adopted granddaughter Rachel Childs; and a special friendship with her Otoe relatives. She is preceded in death by her loving spouse, Curtis Horse; parents; son, Carleton Curtis Horse, siblings, Marlene Niedo, Ellen Marie Satepeahtaw, Thad "Bobby" Toyekoyah, Melvern Komalty, Archie Lynn Ware. Visitation for Penelope will be on Sunday, February 7, 2021 from 1:00pm - 3:00pm at Ray and Martha's Funeral Home in Carnegie, Oklahoma. The family will be having private funeral services. Under the direction of Ray and Martha's Funeral Home in Carnegie, Oklahoma.

Penelope "Penny" Harriett (Toyekoyah-Komalty) Horse, 80, was born on February 17, 1940 to Matthew Komalty and Vena "Gertie" Ware in Lawton, Oklahoma. She passed away on Thursday, February 4, 2021 surrounded by her family, peacefully at her... View Obituary & Service Information

The family of Penelope Harriett Horse created this Life Tributes page to make it easy to share your memories.