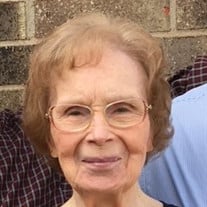 Opal Lee Noble, age 97, went to be with the Heavenly Saints on March 15, 2022.was born in a farmhouse in Kiowa County, Oklahoma on December 16, 1924, to George and Dorothy Green. She was the oldest of three daughters. Opal was raised on farms around Hobart, Rocky, and Dill City, Oklahoma under the guidance of a loving mom and Dad. She was a typical farmer's daughter who milked cows, hoed and pulled cotton, did house chores, and helped raise her two sisters. Opal graduated in 1942 as Salutatorian and was offered a college scholarship. However, she turned it down to marry her high school sweetheart, John Andrew Noble, and be with him as he trained in the Army Air Corps during World War II. The couple married September 1, 1942.She was an army wife who followed her husband from various west coast Air Force bases from San Diego to Seattle, Washington. During those years, she had many jobs from bookkeeping at Sears to picking figs at a fig orchard to sorting mail at the US Post Office. They celebrated the end of the war in Seattle, and John was honorably discharged February 1946.They moved back to Oklahoma in 1947, where she had several jobs in Elk City and Clinton. and John and her two sons, Keith and Kent, moved to Snyder Texas in 1951, where she lived until 1998 after her husband passed away. In Snyder, she had several jobs as secretary and bookkeeper. While her sons were growing up, she got a job with the school system so that she would be off when they were out of school. In 1998, she moved to Wichita Falls to be near her sons and their families. would say later that of all the jobs she had, her favorite was being a stay-at-home wife and mom though she didn't realize it at the time. Opal was a woman of immense faith. She loved God, country, and family - and in that order. was an active member of the First Christian Church in both Snyder and Wichita Falls until she could no longer attend. Opal was preceded in death by her mom and dad; her husband, John; and her two sisters, Della Jo Christian and Molly Gaye Klump. She is survived by her two sons, Keith and his wife, Linda Bea Noble of Decatur Texas and Kent and his wife Linda Hawley Noble of Wichita Falls; three grandchildren, Barrett Noble, and his wife Carla, Amy D. Osteen and her husband Chad, and Justin Noble and his wife Kristal of Abilene Texas; and John's younger brother, Terry Noble and his wife Doris of Fresno California; seven great-grandchildren; and one great-great-grandchild. lieu of flowers, you may make donations to Hospice of Wichita Falls 4909 Johnson Rd, Wichita Falls, Texas 76310.

Opal Lee Noble, age 97, went to be with the Heavenly Saints on March 15, 2022.was born in a farmhouse in Kiowa County, Oklahoma on December 16, 1924, to George and Dorothy Green. She was the oldest of three daughters. Opal was raised on farms... View Obituary & Service Information

The family of Opal Lee Noble created this Life Tributes page to make it easy to share your memories.

Opal Lee Noble, age 97, went to be with the Heavenly Saints on...