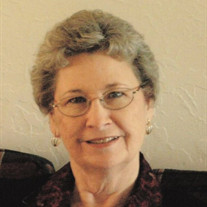 Oma Gean Capps Holt Geis was born on May 2, 1935 in Altus, Oklahoma to Raymond and Sarah (Red) Capps. Oma Gean passed away on January 9, 2022 in Blanchard, Oklahoma at the age of 86 years old. She was the youngest of 4 children and grew up on a farm northeast of Blair, Oklahoma. She graduated from Blair High School in 1953 as valedictorian and played on Blair High School Girls' Basketball State Championship teams Class B 1952 and Class A of 1953. Oma Gean was selected to the Oklahoma Girls Basketball All-State Team 1953. Subsequently, she accepted a scholarship offer to play girls basketball at Wayland Baptist College in Plainview Texas for the Flying Queens women's program. She was part of a winning streak of 131 consecutive wins from 1953-1958 and was part of 3 National Championship Teams. Wayland Baptist afforded her lifelong friends and she was always grateful for that opportunity. Oma Gean married Delbert Holt on May 27, 1956 and enjoyed 50 years of marriage. They were blessed with 2 children, Cindy Jo and Hal Dean. She finished her Bachelors' degree in Business Education at Southwestern in Weatherford, Okla. Then she later completed her Masters' degree in Language Arts from Southwestern. She retired after 28 years in education teaching most of her years in Blair, Oklahoma. During their retirement years Oma Gean and Delbert enjoyed attending athletic events and traveling with her sister Norma and husband Bob Stephenson. Oma Gean was a member of the Jackson County Retired Teachers Association for many years. She was also inducted into the Jackson County Sports Hall of Fame. Oma Gean was a member of the Blair First Baptist Church for numerous years and loved singing with her friends and in the choir. Oma Gean loved music, needle pointing, athletics and spending time with her family. She enjoyed telling stories of growing up on her family's orchard east of Blair and time spent with her best friend Sue (Pryor) Todd. Oma Gean loved the community of Blair and Blair School. She would always say she was so blessed when talking about where she grew up and her family. Delbert passed away in 2006 and Oma Gean married Dale Geis and moved to Norman, Oklahoma. She later moved her church membership to NorthHaven Church in Norman, Oklahoma. Oma Gean has lived in Norman since 2007. Oma Gean and Dale had several years that they traveled to see family and enjoyed going to OU Athletic events. Dale passed away in 2012. In 2013, the Wayland Baptists Women's Basketball teams that Oma Gean played on were inducted into the Women's Basketball Hall of Fame in Knoxville, Tennessee as Trailblazers of the Game. The same Wayland Baptist Flying Queens women's basketball program was also inducted into the Naismith Basketball Hall of Fame, Springfield, Massachusetts September 2019. Preceded in death by her parents Ray and Sarah Capps. Brothers Onzel Capps and wife Bonnie, and Verl Capps and wife Helen. Husband Delbert Holt and Husband Dale Geis. Survived by daughter Cindy Jo Rieger and husband Sid of Blanchard and son Hal Holt and wife Marla of Sentinel, four grandchildren, Christa Geary of Norman, Ray Rieger and wife Robyn of Norman, Alyssa Wald and husband Jantz of Hobart and Bryan Holt of Weatherford and fianc� Laci Friesen of Thomas, also four greatgrandchildren; Lofton Taylor of Norman, Everly, Scarlett and Deacon Wald of Hobart. Sister Norma Stephenson of Norman. Step children Stephen Geis of Houston, Texas, Marilyn Chappelear of Houston, Texas, Ruth Dyer of Manhattan, Kansas and numerous other relatives and friends. Oma Gean had a competitive nature yet she was kind hearted. She set a high standard for all to follow. She trusted God in all circumstances with an abundance of faith in her Lord Jesus Christ. Family request in lieu of flowers that donations be made to: BEA/Blair Education Association P.O. Box 428 Blair, OK 73526 Viewing: 9:00 a.m.~ 8:00 p.m., Tuesday, January 11, 2022 Ray & Martha's Funeral Home Hobart, Oklahoma Graveside Service: 2:30 p.m., Wednesday, January 12, 2022 Blair Cemetery Blair, Oklahoma

Oma Gean Capps Holt Geis was born on May 2, 1935 in Altus, Oklahoma to Raymond and Sarah (Red) Capps. Oma Gean passed away on January 9, 2022 in Blanchard, Oklahoma at the age of 86 years old. She was the youngest of 4 children and grew up on... View Obituary & Service Information

The family of Oma Gean Geis created this Life Tributes page to make it easy to share your memories.