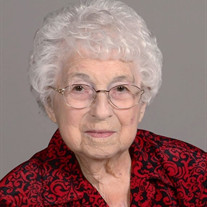 Norma Dean (Barton) Dyer McPherson, 96, of Carnegie, Oklahoma passed away peacefully at her home on July 17, 2020. She was born on a farm west of Moore, Oklahoma on February 15,1924 to A.C. Barton and Della Phene (Shade) Barton. She was the youngest of five children: Arthur, Almetta(Toots), Beatrice, and Russell all of whom preceded her in death. Her first six years of school were at Moore and in 1936 the family moved 11 miles south and � of a mile west of Carnegie where she attended school at Dixie and later Alden. Norma's family owned a thrashing machine and The Cook Shack, where she worked during harvest times. At the age 17 she married Carl Dyer on August 8, 1941 and to that marriage were born two children, Dwane and Doreen. Norma and Carl farmed and raised cattle south of Carnegie until Carl passed on November 1, 1990. Norma continued in the family farming and cattle operation until the day she passed. As little as a few years ago she was still seen mowing her lawn, checking cattle, and growing her yearly summer garden. She was a member of the Caddo County Cattlemen's Association and the Noble Research Institute. She was also a member of the First Baptist church in Carnegie, Oklahoma. She loved her church family and was a member of the choir for many years. Norma was an avid seamstress, quilter, crocheter, and painter and was a member of Neola Club where she made many blankets and quilts for family members and friends. Her paintings are in many family and friends' homes as well. On May 17,1999 Norma married Ivan McPherson. Ivan had two children, Myrna and Curtis, whom she had a special relationship with that continued after Ivan's passing in 2000 and up until her passing. Survivors include her children: son Dwane and wife Shirley of San Antonio, TX and daughter Doreen Payne and husband John Dee of Mtn.View, OK Brother in law: A.B. McPherson and wife Evelyn of Oklahoma City, O Step-children: Myrna Morse, Yukon, OK Curtis McPherson and wife Ann, Gracemont, OK Nine grandchildren: Don Payne and wife Laura of Mtn. View,OK Carmen Patterson and husband Greg of Escondido, CA Marla Turney of Lawton, OK Candi McAvey and husband Danny of Amarillo, TX Jason Dyer of Houston, TX Kevin Dyer of Houston, TX Tim Morse and wife Brenda, Verden, OK Marvan McPherson and wife Sherry, Oklahoma City, OK Curtis Ron McPherson and wife Theresa, Oklahoma City, OK Ten great-grandchildren, one great- great grandchild, and many special nieces and nephews. Under the direction of Ray & Martha's Funeral Home Carnegie, Oklahoma

Norma Dean (Barton) Dyer McPherson, 96, of Carnegie, Oklahoma passed away peacefully at her home on July 17, 2020. She was born on a farm west of Moore, Oklahoma on February 15,1924 to A.C. Barton and Della Phene (Shade) Barton. She was the... View Obituary & Service Information

The family of Norma D McPherson created this Life Tributes page to make it easy to share your memories.