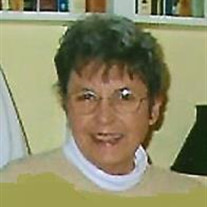 Norma B. Crane, resident of Hobart, Oklahoma died Monday morning, Mar 22, 2021 in her home, surrounded by her family. Born November 25, 1931 in Hobart, as Norma Diehl Barnes, she attended Hobart schools and graduated from Hobart Highschool as Football Queen in 1949. She attended Oklahoma State University where she was a member of Pi Beta Phi Sorority and served as that chapter's Pledge Trainer. Norma was also on the Student Senate at OSU, and she was the Assistant Editor of Oklahoma State's newspaper, the O'Colly. She graduated in 1953 with a degree in Journalism. Norma then moved to Oklahoma City where she worked downtown for a local radio station writing continuity. It was there that she met her husband, Tom Crane. After their marriage, the couple moved to Wichita Falls. Norma worked out of her home raising her family and doing a variety of volunteer and community work. She also wrote press releases and did media documentation for the then, U.S. Congressman, Graham Purcell. Norma was also a member of the Jr. League of Wichita Falls. After her divorce in 1980, she began working full-time for the City of Wichita Falls as the Public Information Director, and she was extremely instrumental in that city's restoration following the tornado that devastated Wichita Falls, April 10, 1979. Among the plethora of improvements Norma was involved in at this time, she also helped conceive and complete "Putting the Falls Back in Wichita Falls", the project that rebuilt the waterfalls that can readily be seen entering the city from the North on Highway 287. After her retirement from the City of Wichita Falls, Norma came home to Hobart where she jumped into a cadre of community development projects and improvements. In 2009 she was awarded Hobart's Citizen of the Year by the Hobart Chamber of Commerce. She was a member of the First Presbyterian Church in Hobart. Norma is survived by her daughter Leigh Crane-Freeman, her husband Luke, and their son John, from the Panhandle of Oklahoma. Norma's son John Crane M.D., his wife Suzy Saenz M.D. and their sons Nathan, Dawson, and Isaac are from Loveland, Colorado. Norma has two brothers, George Barnes living in Hobart, and Jim Barnes residing in Lawrence, Kansas, her sister-in-law Judy Barnes, four nieces, Tracy Belton, Shelly McIntyre, Jill Golsen, and Christy Christian, two nephews, Billy Barnes, and Clint Barnes, and two great-nieces, Charla and Dasha Christian. She was proceeded in death by her grandmother Naomi Diehl, her mother Christine Barnes, her father Sidney Barnes, and her sister Paul McIntyre. In lieu of flowers or memorials the family requests that if you wish to honor Norma, please call or write the Parkinson's Foundation and respectfully but firmly request that, in memory of Norma Crane, they earmark the majority of their funding towards the cure of Parkinson's in lieu of the treatment or the awareness of the disease, and to get the cure found! The Parkinson's Foundation, 200 SE 1rst Street, Ste 800 Miami, Florida 33131, USA. 1.800.473.4636

The family of Norma D. Crane created this Life Tributes page to make it easy to share your memories.