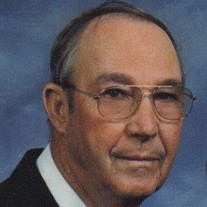 -Nolan Hardwick, 95, resident of Daphne, Alabama, and long-time Hobart resident, passed away on Monday, January 4, 2021. He was born March 10, 1925, in Greeley, Colorado, to JW and Omah Zella (Eden) Hardwick. He spent most of his youth in northwest Arkansas and southwest Missouri before moving to Rocky in 1941. He graduated from Rocky High School. Nolan married Betty Lou Swart on October 8, 1945, in Vernon, Texas. They moved to Hobart in 1956 and he worked many years at the Farmers Coop, first in Hobart, and then as the manager in Roosevelt. He also farmed most of his life, raising wheat and cotton, and chickens, pigs, and cattle. Nolan and Betty always had a garden, where they raised produce that they shared with friends and family. Nolan was a member of the First Baptist Church in Hobart for many years, then the First Baptist Church in Irving, Texas, and most recently, he was a member of the Jubilee Baptist Church in Daphne, Alabama. He enjoyed attending Sunday school and church services and had missed not being able to attend recently. Nolan loved singing hymns to the staff and residents of the assisted living center where he lived, as well as to family and other visitors. Nolan also enjoyed playing dominoes and bingo, and watching football and old westerns. Survivors include five children, James Hardwick, Fremont, California; Barbara Collier and husband, Bob, Euless, Texas; Kenneth Hardwick and wife Becky, Arvada, Colorado; Randy Hardwick, Pottsboro, Texas; and Marcia Miller and husband Terry, Daphne, Alabama; thirteen grandchildren; and eight great-grandchildren; one sister, Irene McClure, Oklahoma City, Oklahoma; and many friends and extended family. Nolan was preceded in death by his wife, his parents, one son, Richard, two grandchildren, two brothers, and two sisters.

-Nolan Hardwick, 95, resident of Daphne, Alabama, and long-time Hobart resident, passed away on Monday, January 4, 2021. He was born March 10, 1925, in Greeley, Colorado, to JW and Omah Zella (Eden) Hardwick. He spent most of his youth in... View Obituary & Service Information

The family of Nolan R Hardwick created this Life Tributes page to make it easy to share your memories.