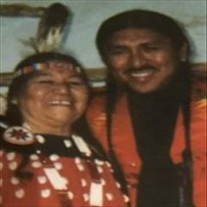 Niel Poapybitty, 56, was born on December 20, 1964 to Kenneth Poafpybitty and Mary Ann Anquoe in Lawton, Oklahoma. Niel is the grandson of the late James Anquoe and Anna Keahbone Anquoe. He is the great-grandson of the late Edgar and Sindy Keahbone. Niel's Kiowa name, Thy-kohn-ki meaning "man with a spot on his face," was given to him by his late maternal grandfather, Jamie Asa also known as, Jimmy A. Niel passed away peacefully in his sleep on March 11, 2021 at his home in Stillwater, Oklahoma. Niel was the youngest of six children. He grew up in northeastern Oklahoma attending both Sequoyah High School in Tahlequah, Oklahoma and Booker T. Washington High School in Tulsa, Oklahoma. In his youth, he was active in baseball, football, and fancy-dancing at powwows. He received accolades for pitching no-hitters during his baseball career. Niel could often be found around the center drum and the 49 - singing, joking, and sharing stories. He loved music, making people laugh and smile, and was kind-hearted to anyone and everyone. He never met a stranger. Niel was a skilled carpenter by trade, and he took pride in knowing that when he arrived on a job there was nothing, but when he left there was an entire building in place. In his later years, he made drumsticks, hand-drums, dreamcatchers, an other traditional items in his spare time. He took pride in his traditions and family lineage. Niel is survived by one son, Iryon T. Ongu Poafpybitty; three daughters, Kiesha Kee-Sa-Ma Poafpybitty, Karis Deon Tso-Tso-Ma Poafpybitty, Nia Kay Beaver; two brothers, Warren Anquoe, Shaunday Poafpybitty; three sisters, Jonita Anquoe, Kay Apresing, Deanna Poafpybitty; two grandsons, Anthony King Smith, Kalen Nykel Smith. Niel is preceded in death by his parents, Kenneth Poafpybitty and Mary Ann Anquoe. Visitation for Neil will be on Monday, March 15, 2021 from 9:00am - 8:00pm and Tuesday, March 16, 2021 from 9:00am - 1:00pm at Ray and Martha's Funeral Home in Carnegie, Oklahoma. Graveside services for Neil will be at 2:00pm on Tuesday, March 16, 2021 at Aunquoe Memorial Cemetery in Mountain View, Oklahoma. Officiating will be Deacon Donnie Ahhaitty. Under the direction of Ray and Martha's Funeral Home in Carnegie, Oklahoma.

Niel Poapybitty, 56, was born on December 20, 1964 to Kenneth Poafpybitty and Mary Ann Anquoe in Lawton, Oklahoma. Niel is the grandson of the late James Anquoe and Anna Keahbone Anquoe. He is the great-grandson of the late Edgar and Sindy Keahbone.... View Obituary & Service Information

The family of Niel Poafpybitty created this Life Tributes page to make it easy to share your memories.