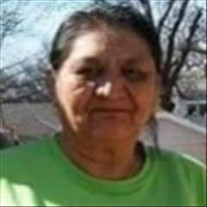 Naomi "Sugar" Ruth Toppah was born February 19, 1951 and passed away on November 25, 2020. She was born to Ada Toppah and resided in Carnegie her entire life. She attended Carnegie Schools all her life and graduated from Carnegie High School, receiving her diploma in 1970. After graduating, Sugar attended job corp in Guthrie, Oklahoma for awhile before returning home to Carnegie, Oklahoma. She worked various jobs before settling down as a homemaker. Sugar was a member of the Botone Memorial Church and Carnegie Victory Club. Sugar was an avid card player. She enjoyed playing the card game Skip Bo, especially when she was winning. She also enjoyed going to the casino. Not only did she support her immediate family in the pow wow circle, she enjoyed helping other families and organizations with her fry bread-making abilities. Although she was proud of all of her children and grandchildren, one of the proudest moments of her life was when her granddaughter, Simone, became the Kiowa Tribal Princess. Sugar helped care for and raise many other children throughout the years by babysitting. Many kids call her Grandma Sugar and Auntie Sugar. That's the only name they knew her by, and she would always answer, as if they were her own. Sugar is survived by her children, Sidney Toppah and his wife, Shawndae Cash Toppah of Wichita, Kansas, Robert Toppah of Lawton, Oklahoma, Martha Toppah of Pearsall, Texas; her mother, Ada Toppah; two brothers, Edgar Toppah of Carnegie, Oklahoma and Alex Ross of Carnegie, Oklahoma; fifteen grandchildren; seven great-grandchildren; numerous Kiowa brothers and sisters, nieces and nephews. Sugar is preceded in death by companion, Robert Woodrow; brothers, Allen Toppah, James Ross, Titus Toppah, and Cliffod Tongkeamah; sister, Wanda Sue Hainta; grandparents, Esther Lonewolf and Cheevers Toppah. Graveside services will be at 11:00am Tuesday, December 1, 2020 at Cedar Creek Cemetery in Carnegie, Oklahoma. Officiating will be Pastor Gerald Haunpo. Under the direction of Ray and Martha's Funeral Home in Carnegie, Oklahoma.

Naomi "Sugar" Ruth Toppah was born February 19, 1951 and passed away on November 25, 2020. She was born to Ada Toppah and resided in Carnegie her entire life. She attended Carnegie Schools all her life and graduated from Carnegie High School,... View Obituary & Service Information

The family of Naomi Ruth Toppah created this Life Tributes page to make it easy to share your memories.