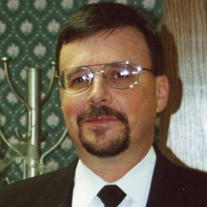 Michael "Mike" Kelly Pasby was born January 19, 1962, in Canadian, Texas, to Jimmie and Jo Ann (Cogburn) Pasby. He passed away Friday, November 19, 2021, in Oklahoma City, Oklahoma, at Mercy Hospital. Mike was raised in Clinton, Oklahoma, and graduated from Clinton High School in 1980. Over the years, he worked for the Clinton Lumber Yard, Sammons/Cable One, Hyman Oil Co., and Domino Transports. He found his passion for helping people in 2005 when he and his best friend, Danny Gietzen, hauled fuel to the victims of Hurricane Katrina. On March 1, 2002, he married Kimberly Reyes of Omaha, Nebraska and they made their home in Arapaho, Oklahoma. Later, Mike and Kimberly semi-retired at Fort Cobb Lake where Mike volunteered at the Crow Roost Fire Rescue for several years and worked his way to foreman for the Caddo County District 1. Mike enjoyed playing golf and had shot a Hole-in-One at the Riverside Golf Course in Clinton. He also enjoyed dancing, singing karaoke, cooking outdoors, fishing, playing guitar, and taking his dogs for boat rides and neighborhood golf cart rides. He could build and modify anything Kimberly could come up with and helped everyone he could with anything they needed. Mike is survived by his wife, two daughters, Kim (Pasby) Weil and husband, Cody, of Clinton, Oklahoma, and Brandi Layton of Fort Cobb, Oklahoma; two sons, Brian Layton and wife, Cassie, of Manhattan, Kansas, and Michael Huston and wife, Sara, of Mason, Ohio; twelve grandchildren; two great-grandchildren; two sisters, Debbie Gossman of Oklahoma City and Cindy Lockstone and husband, Marty, of Weatherford, and a brother, Keith Pasby and wife, Teresa, of Tyler, Texas, and one sister-in-law Patti Robertson and husband, Tommy, of Weatherford and five brothers-in-law, Jim, John, Bob, Mike and David and numerous aunts, uncles, nieces, and nephews. He was preceded in death by his parents, one grandchild, and two brothers-in-law. Services will be held at a later date. Under the direction of Ray & Martha's Funeral Home, Anadarko, Oklahoma

The family of Michael Kelly Pasby created this Life Tributes page to make it easy to share your memories.